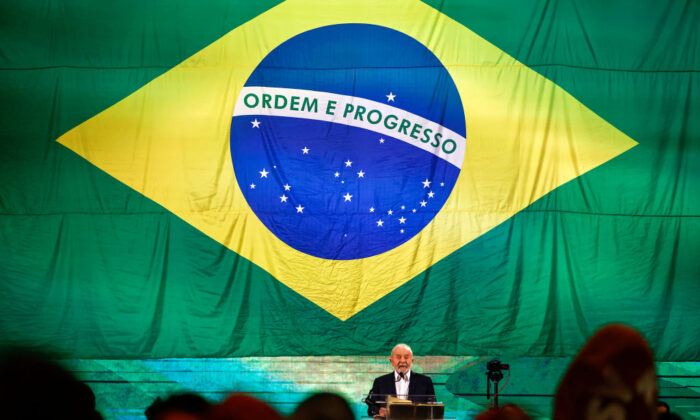 Brazilian Presidential Elections: Lula’s Reelection Would Be a Reward for Corruption

When running as a candidate for the 2002 presidential elections, Brazil’s former president and now presidential candidate, Luiz Inácio Lula da Silva, commonly known as “Lula,” pledged to do everything to combat corruption. In 2002, he even signed an “Anti-Corruption Pledge” prepared by Transparency International.

Ironically, however, corruption ended up reaching unprecedented levels during the Lula administration, from 2002 to 2010. Numerous of his closest advisers, congressional leaders, and party bosses were deeply involved in large-scale transfers of public funds into electoral campaigns, private enrichment, and financing of full-time public functionaries.

The first in a continuous series of corruption schemes was unveiled in February 2004, with a video recording of Waldomiro Diniz, the deputy chief for parliamentary affairs, collecting bribes from a gambling tycoon for the electoral campaign of Workers’ Party (PT) politicians. Since the action was both filmed and recorded, Lula had no other option but to dismiss him from the party.

In another corruption scandal, Lula’s PT was found paying bribes to members of Congress in return for their votes in August 2005. The case began to be uncovered when a political appointee working at the postal service was filmed telling two bogus businessmen that they could win public contracts by paying bribes to Roberto Jefferson, the parliamentary leader of the Brazilian Labour Party.

In an attempt to deflect media attention from himself, Jefferson disclosed another, far more serious scandal. On June 15, 2005, he told a congressional ethics committee that the ruling party was paying a monthly allowance of US$12,000 to congressmen in return for their support for government bills, thus allowing the Lula administration to obtain a “de facto” majority in Congress through means of bribery. He named the then chief of staff, Minister José Dirceu, as the creator of the scheme.

According to Arthur Ituassú, a foreign relations professor,

“Dirceu is a high-profile figure in Brazilian political life, well-known to the country’s political class and media for many years … He trained as a guerrilla in Cuba and returned [to Brazil] in disguise with a new identity. For years, he did not even reveal his real name to his own wife. He was successful in studies and politics, where his Stalinist expertise greatly helped his rise to become Lula’s most trusted aide. Dirceu’s guiding mantra was clear to everyone: It does not matter how you do it as long as you do it. By operating according to it, he was both feared and powerful inside the PT and (after 2002) the government; and it is also how he planned to reach the presidency after Lula’s second term expired in 2010.”

When a group of congressmen expressed the desire to establish a Parliamentary Investigatory Committee to investigate these notorious scandals, the government’s political coordinator at the time, Aldo Rebello, a member of the Communist Party of Brazil, claimed that any such parliamentary investigation would amount to a plan of “reactionary forces” to destabilize the “progressive” Lula administration.

Fortunately, another congressman, Valdemar da Costa Neto, confessed to an ethics committee that he had personally received payoffs from Lula’s party. Forced to resign from his parliamentary seat in August 2005, he went on to reveal the government’s involvement in a further corruption scheme in which he and other political leaders were receiving bribes to support Lula’s candidature for reelection in the 2006 presidential election.

Lula’s Own Brother Did Not Believe Him

Because of the weight of evidence against him, even his own brother, Jackson da Silva, thought it was “impossible” that Lula did not know that most of his closest friends, including Dirceu, who resigned from the ministry in 2005, and Delúbio Soares, the PT’s treasurer, were bribing members of parliament.

“They have been with my brother for years. My wife can cheat on me for a month, but not years. If Dad were alive he would have pulled his ear for not saying the truth,” said Lula’s brother, Jackson da Silva.

Curiously, the serving chief justice at the time, Nelson Jobim, expressed on the occasion his opposition to the impeachment of Lula, claiming that this could trigger “an untenable climate of confrontation, given his continued popularity and strong support-base, making the country ungovernable for years to come.” And so, the highest judicial authority in the nation basically regarded Lula’s popularity as counting for more than the respect for the rule of law.

Corruption An Endemic Problem During the Lula “Progressive” Administration

Perhaps also important is to consider that, during the Lula administration, the federal government employed more than 40,000 members and supporters of the president to work in the public administration. This led retired Chief Justice Maurício Corrêa to comment that even the more technical government jobs were actually going to unqualified party members, who had to give a levy of up to 20 percent of their income to the ruling PT. By being indirectly financed by Brazilian taxpayers, PT unsurprisingly became far richer and more powerful than all other parties in Brazil put together.

As can be seen, corruption was an endemic problem during the Lula “progressive” administration. In those days, the Brazilian media was day after day full of reports of numerous cases of widespread corruption.

Fortunately, these numerous corruption scandals that shook the Lula administration had the beneficial effect of demoralising a government bent on establishing a long-lasting populist regime based on a disguised form of socialist dictatorship.

Of course, it would be incredibly unwise for the Brazilians to return this far-left candidate to the presidency. For Lula would finally be able to finish the job he had started of turning Brazil into another Cuba or Venezuela. Personally, I don’t believe Brazilians would be so unwise. Under fair and transparent elections, it is simply impossible to conceive that Lula da Silva can ever be re-elected to the presidency of Brazil.