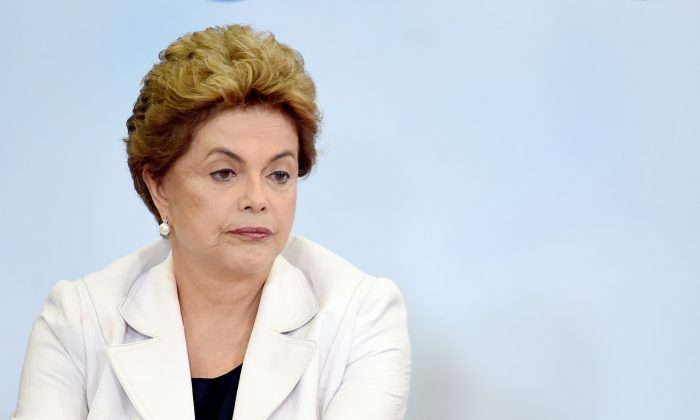 Leaders of the Brazilian Democratic Movement Party, known as the PMDB, announced that party members would be immediately leaving their six cabinet posts, as well as some 600 federal government jobs.

“The exit of the PMDB is the last nail in the coffin,” he added.

The president faces impeachment proceedings over accusations that her government illegally borrowed funds to mask the reality of government finances during the country’s deep recession.

Rousseff needs to secure at least 172 out of 513 votes in the lower house of Congress in order to stop the impeachment process from moving forward. A vote is expected around mid-April.

If Rousseff is impeached, her vice president Temer would take over.

We have responsibility for the day after.
— Senator Aecio Neves, PSDB

However, Neves said different opposition groups are preparing for a post-Rousseff scenario.

“We have responsibility for the day after,” he told AFP.

Meanwhile, at an event for the government’s public housing scheme, Rousseff shot back at the impeachment process calling it an attempted “coup” against her, adding she has not committed a crime.

Only 10 percent of Brazilians have a favorable opinion of Rousseff.

A new poll by the Ibope polling agency released on March 30, showed that only 10 percent of Brazilians have a favorable opinion of Rousseff. The extremely low number is just slightly up from the single-digit approval ratings the president had last year.

However, negative public opinion on politicians goes beyond the president. Vice President Temer has been hit by accusations claiming he took part in corruption schemes. The next two politicians in line after Temer, the head of the Senate, Renan Calheiros, and head of the lower house, Eduardo Cunha, have also been accused.

All three have denied any wrongdoing.