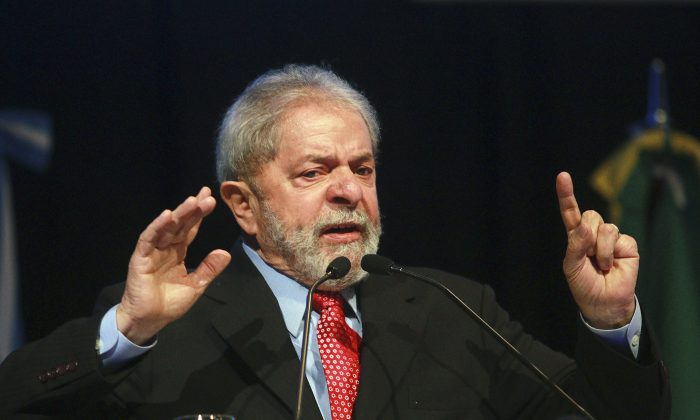 RIO DE JANEIRO—Brazilian police on Friday were questioning former President Luiz Inacio Lula da Silva and searching his home and other buildings linked to him as part of the sprawling corruption case at the oil giant Petrobras.

Silva’s spokesman, Jose Crispiniano, confirmed that police were at addresses belonging to Silva, including his residence in Sao Bernardo do Campo in the greater Sao Paulo area and the Instituto Lula, his nonprofit organization. Crispiniano said Silva was speaking to investigators at the federal police station at Sao Paulo’s Congonhas airport.

Crispiniano said police are acting on a warrant that requires Silva to answer questions as part of the continuing probe into corruption at Brazil’s Petrobras oil giant.

Christianne Machiavelli, the spokeswoman of Judge Sergio Moro, who is spearheading the so-called Car Wash investigation into corruption at Petrobras, said that Silva is permitted to answer questions at any federal police station in the country and will not be taken to Curitiba, where Moro is based.

In a statement on their website, the police said they are carrying out 44 judicial orders as part of the Car Wash probe.

The statement did not provide the names of those targeted, but it did specify that some of the orders are taking place in the beachfront city of Guaruja, as well as the rural town of Atibaia.

Silva is suspected of having homes in both places, and investigators are probing reports they may have been remodeled by construction companies caught up in the Petrobras scandal, which has already ensnared top businessmen and heavyweight politicians from the governing Workers’ Party as well as the opposition.

Last week, Silva and his wife, Marisa, were initially meant to appear before state investigators over the matter, but their lawyers said the two would not come and the appearance was cancelled.

On Thursday, the Supreme Court allowed corruption charges in the case to be brought against Eduardo Cunha, a top opposition figure and speaker of the lower house of Congress.

Prosecutors say more than $2 billion was paid in bribes by businessmen to obtain Petrobras contracts. Investigators also have said that some of the money made its way to several political parties, including the Workers’ Party.