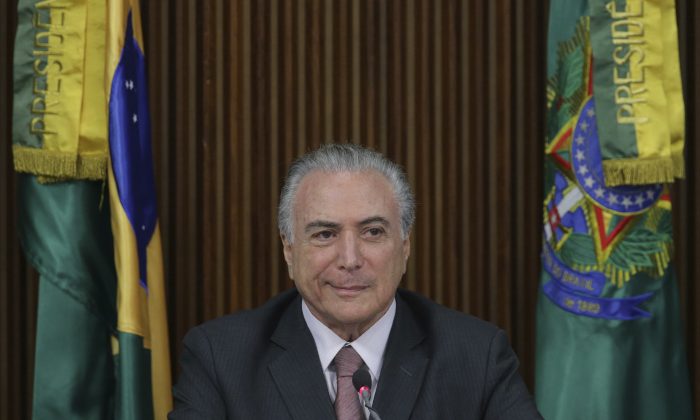 The announcement feeds a growing scandal over alleged misuse of power that threatens Temer’s presidency only six months after he replaced a predecessor ousted from office by Congress—and at a time corruption investigations have tarred many senior politicians.

At least one opposition party says it will submit a motion to impeach the new president.

Temer, who is deeply unpopular with many Brazilians, has been struggling to push through an ambitious austerity agenda he says will pull Latin America’s largest economy out of its worst recession in decades. Since May, his administration has lurched from one scandal to the next, but until now, none had directly implicated the president.

Temer’s administration “just turned six months and it already looks old,” Fabio Zanini, political editor of the daily newspaper Folha de S.Paulo, wrote Friday. “The strategy to win popular legitimacy with an economic recovery and political stability is quickly sinking for a president who was not supported by the popular vote.”

Brazil’s Rousseff Defends Self Ahead of Senate’s Ouster Vote

The latest crisis started when former Culture Minister Marcelo Calero told federal police that Temer’s legislative affairs minister, Geddel Vieira Lima, pressured him to allow construction of a luxury building in a historic preservation area in the city of Salvador, 1,000 miles (1,600 kilometers) northwest of Rio de Janeiro. Lima had bought a unit in the planned development.

Calero, who resigned last week, testified that Temer himself suggested that he use a method to avoid the normal oversight process for such a building.

Calero said Temer invited him to the presidential palace last week to suggest “a way out,” indicating that the building restrictions had created “operational difficulties” in his administration, according to Calero’s testimony.

“Politics has these things, that kind of pressure,” Temer said, according with Calero.

In his resignation letter, Lima said the accusations of wrongdoing were merely “interpretations.” He said he was stepping down because he and his family were suffering due to the accusations.

Lima is the sixth minister in Temer’s government to resign amid allegations of corruption.

“I never acted in bad faith or in deceitful ways,” Calero said on his Facebook page. “I fulfilled my duties as a Brazilian citizen not to comply with illegalities and acts with respect to the institutions.”

The left-leaning Socialist and Liberty Party pledged that on Monday it would submit a measure to Congress to impeach Temer. But to move forward, it would have to be accepted by Rodrigo Maia, speaker of the lower Chamber of Deputies and a Temer ally.

After Brazil’s Rousseff Ousted, What About Corruption Probe?

“The damage can grow,” Stuenkel said. “There will be speculation about the future and that will also delay attempts to pass reforms.”

The political scene was embittered by the impeachment trial and ouster of former President Dilma Rousseff, who was found guilty by the opposition-led Senate of breaking budgetary laws. Temer was vice president and replaced her, making him a target for Rousseff allies who called her ouster a legislative “coup.”

Temer is pushing to pass a major overhaul of the pension system and to impose a spending cap on government spending. The country’s economy is expected to contract by 3 percent this year after a similarly bad 2015.