10 Icelandic Music Festivals to Plan Your Life By
0 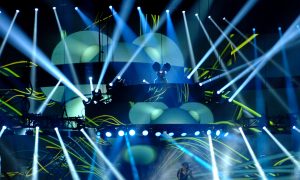 A popular Brazilian music artist was killed when high winds caused the superstructure over the stage to collapse in the middle of a performance on Dec. 17.

DJ Kaleb Freitas, 30, was performing for a crowd of about 5000 at the Atmospheres electric dance music (EDM) festival at Esteio, Brazil, about 400 miles south of the capital, Sao Paulo.

During his set, high winds from a freak storm caused the steel superstructure arching over the stage to break loose at one end and then collapse, striking the dance-music DJ in the head.

DJ Kaleb, whose real name was Kalleby Frietas de Rosa, was taken to a São Camilo Hospital in Esteio, where he was pronounced dead.

A number of other festival-goers reported minor injuries. The exact number is unclear, though the New York Daily News reports three.

A Brazilian paper, Gauchazh, reported that seven people were taken to the hospital—three hurt in the stage collapse, two who reported disorientation, and one man who was found dead the next morning of yet-unknown causes.

Sergio Bandoca, one of the event organizers of the event, told the New York Daily News the scene “was madness. The scale of the tragedy could have been far worse. Things were flying all over the place. There was panic.”

The Festival organizers posted a message on Facebook saying, “We always cherish the safety of our public, following all the processes, reports and authorizations requested by the local authorities.

“We are devastated. We lost a friend, an artist. Our priority is to assist the wounded and their families.”

Esteio Fire Department Commander, Sergeant Luciano Machado Morais, reported that the festival had all the necessary permits and the stage was up to code, but the unusually severe weather stressed the superstructure beyond its capacity.

An investigation is underway into why the concert organizers did not postpone performances until after the storm, with gale-force winds, had passed through the area, according to TMZ.