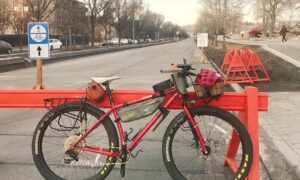 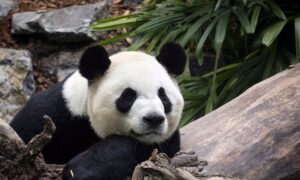 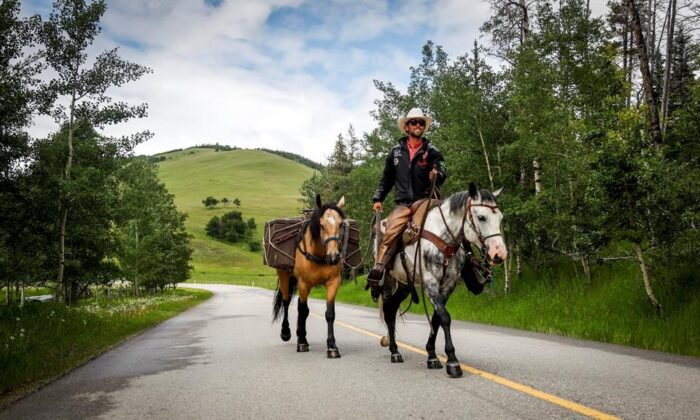 Filipe Masetti Leite, a Brazilian cowboy who has been riding from Alaska to Calgary and who has also been chosen as the parade marshal for the Calgary Stampede, rides his pony Smokey as pack pony Mack follows along near Waiparous Village, Alta., onJune 29, 2020. (The Canadian Press/Jeff McIntosh)
Canada

The 33-year-old is scheduled to complete a 3,400-kilometre journey on horseback from Alaska to Calgary today, the same day the Calgary Stampede was supposed to begin.

Although the annual event and a parade to kick it off were cancelled due to the COVID-19 pandemic, Filipe Leite was crowned this year’s parade marshal.

He is to be met by Stampede officials and handed a marshal’s badge before receiving an RCMP escort to the exhibition grounds for a small ceremony.

Masetti Leite moved with his family from Brazil to Calgary when he was nine and later grew up in Toronto.

He has been on long horse rides before, but he says this one is to be his last so he can move on with new challenges.

“Sure enough the year I get picked to be the parade marshal—and it’s a huge honour—there’s no parade, no rodeo,” he says with a chuckle.

“But if this has taught me anything, it’s that you’ve got to be flexible. Someone, somewhere, wanted the Calgary Stampede to be cancelled when Filipe finished his ride, but I’m still blessed to be chosen.”

Masetti Leite covered about 16,000 kilometres riding from Calgary to his parents’ home of Espirito Santo do Pinhal, Sao Paulo, between 2012 and 2014. In 2016, he rode 7,350 kilometres from Brazil to Patagonia.

He says he was inspired to become a long rider by Aime Tschiffely, a Swiss school teacher who rode 16,000 kilometres alone from Buenos Aires to New York City in 1925 and wrote about his experiences.

Masetti Leite has also documented his travels and written the book “Long Ride Home: Guts and Guns and Grizzlies, 800 Days Through the Americas in a Saddle.’’