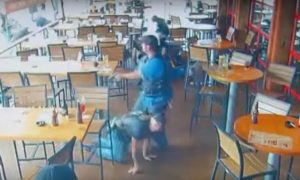 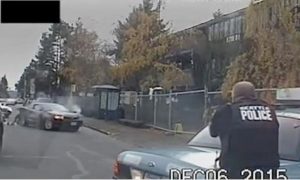 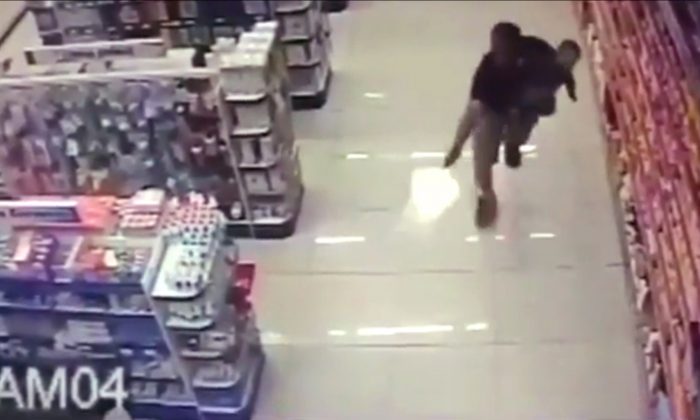 This screen capture from a pharmacy security video shows Sgt. Souza chasing a remaining robber after having shot the other, gun in one hand, infant in the other. (Screen shot, International Business Daily)
Americas

A Brazilian off-duty police officer who stopped by a pharmacy while out with his wife and infant son wound up in a deadly gunfight.

Sgt. Rafael Souza was strolling through the aisles of the Bifarma pharmacy in the Sao Paolo suburb of Campo Limpo Paulista on the afternoon of Saturday, Nov. 18, when a pair of armed robbers rushed in.

The officer, from the 49th Metropolitan Battalion, had been minding his child while his wife talked with the pharmacist and paid for her purchase.

One of the robbers pointed his pistol at Souza, who had identified himself as a police officer.

When he saw the gun pointing his way, Souza immediately drew his own weapon and opened fire.

After dispatching the first gunman, Souza set off after the second.

In the video, Souza can be seen shooting past another patron with his pistol in his right hand while holding his child on his left hip. Souza doubles back and catches the other gunman, while his wife cowers in an aisle, apparently imploring him to hand her their child.

Souza does, but not until he has thoroughly neutralized all threats.

When medical personnel arrived, they pronounced the two suspects—Jefferson Alves, 24, and Italo Creato, 22—dead at the scene, according to International Business Times.

Souza, his wife, and his child were completely unharmed. None of the customers nor the pharmacist were reported injured in any way either. Sgt. Souza seems to have saved them all.

An officer from the Sao Paulo suburb of Campinas got drawn into a gunfight while holding his three-month-old daughter in 2014, according to RT.

That officer had to let go of his daughter to apprehend the suspect. His daughter sustained minor injuries.