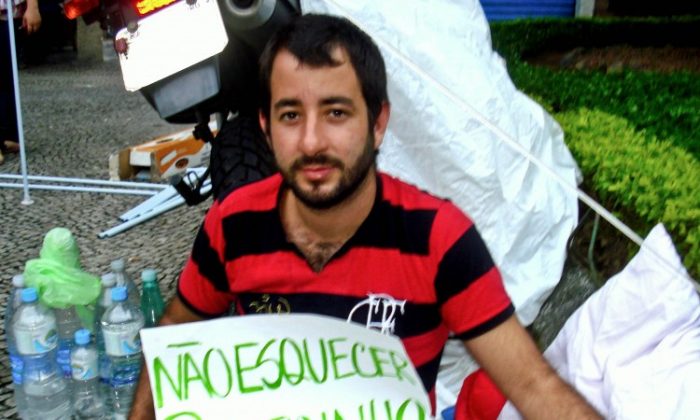 Brazilian activist Pedro Rios Leao stages a hunger strike in front of Globo TV Network on to force the media to report on police brutality during the forced eviction of the Pinheirinho slum in in Sao Jose dos Campos, Sao Paulo state on Feb. 1. (Bruno Menezes/Epoch Times)
Americas

RIO DE JANEIRO—Independent cameraman and activist Pedro Rios Leao, 26, is on a hunger strike in front of the headquarters of Globo TV Network in Rio de Janeiro. Handcuffed to a fence since 6 p.m. on Sunday, ingesting only water, Leao is protesting what he says is a media cover-up of police atrocities during the recent forced eviction of the Pinheirinho community, about 60 miles from Sao Paulo.

Riot police, supported by armored vehicles and helicopters, used rubber bullets and tear gas to drive the 6,000 some residents from the Pinheirinho favela, or slum, in Sao Jose dos Campos, Jan. 22 to 25. All utilities were cut—water, gas, and telephone lines—and the area was sealed off.

Leao recorded testimonies of abductions, injuries, murder, and the concealment of bodies, including a 4-year-old who died after receiving a rubber bullet in the neck.

In another case, resident David Washington Castor Furtado, 32, was shot from behind by a municipal police officer while attempting to flee with his 10-month-old son.

“He was the only injured person I could track and visit while I was in Sao José because his name was leaked. He was in the room 2-16 of the Sao Jose Municipal Hospital and according to doctors he is at risk of becoming paraplegic. Terrified, he would not talk to me because he had already received threats,” said Leao.

“I can’t bear to see children killed and do nothing. The authorities should be reported in the International Criminal Court,” says Leao, who went to the area as soon as he heard what was happening to document it, collect testimonials of residents, and publish them on the Internet.

During the eviction operation, Leao attempted to alert the world to what was happening. “Due to the complete absence of a media in this country, I was denouncing everything on my Facebook page, and during the operation I alternated between helping the residents and trying to inform the people about what was going on. I came out of there because I got scared,” he said.

“What shocked me most was the hatred and barbarous treatment of the residents who were not only expelled from their homes, but continued to be persecuted in the street with gunfire, being hunted like animals. They were forcibly confined in two areas then city police threw tear gas and fired shots,” described Leao.

The just over 0.4 square miles Pinheirinho favela was settled in 2004 on land abandoned by failed vending machine company Selecta. Selecta was owned by billionaire businessman Naji Nahas, who was arrested in 2008 for $8.7 million worth of tax evasion and money laundering. According to Carta Capital magazine, over the past nine years land has increased in value by 25 times.

The eviction was carried out on the basis of a state court decision to repossess Nahas’s now valuable land. However, the repossession was in violation a Federal Court ruling. Moreover, the original land transfer from the government to Nahas has always been a mystery.

The Pinheirinho dwellers also have rights to the land, having lived there for over five years. The federal government had offered to buy the land for the residents, but local authorities sent in the eviction squad in the meantime, violating an agreement to hold off on any action for 15 days while the parties tried to negotiate a solution.

“The Judiciary in Brazil has become a gang. The financial system won against democracy, and ‘judges’ are another market product. This gang doesn’t leave any other choice to people apart from protesting,” said Leao.

“I intend to stay here until people become ashamed, until the governor of Sao Paulo is arrested, until the federal government does something, until someone shows that I can believe democracy exists here. I’ll stay here until I stop believing I live in an enemy state,” Leao told The Epoch Times, earning applause from those gathered around.

“I’m also here because the only chance that these criminals have to escape unpunished is if the case gets suppressed. The media is the last front of resistance against these criminals, because if the media makes a serious investigation, if the population decides to make a move, they will go to jail because there is a lot of evidence,” said Leao, who believes that only through civil society can one achieve justice.

Paulista Taesli Ramirez, 22, an activist and biomedical sciences student came from Sao Paulo to support the cause and expects the media to give due attention to the protest.

A history student at Castelo Branco University, Fernando, 30, has been sharing on the Internet the information that Leao sent from Pinheirinho. He says he came to show his support for the displaced residents. Fernando says social media can only reach people with Internet, so they need to expand their influence by taking to the streets.

“I went there as a an outraged citizen and the police behavior I witnessed was criminal. … The federal police had been expelled by gunfire, the governor behaved like a gang leader dominating a territory,” said Leao.

“Sao Paulo police acted like gangsters terrorizing people on the street and yelling ‘Pinheirinho is ours!’ I cried three times of our fear, the mood was very heavy and we felt very hopeless because no one knew who to turn to, since the federal government has not done anything, even though an adviser to the presidency was shot,” said Leao, referring to Paul Maldos, who was shot with rubber bullets while fulfilling his duties of monitoring the eviction situation.

Leao produced a documentary called “Testimonies of the Brazilian Civil War in Pinheirinho” about the evictions. It shows state deputies, and federal authorities, and the press being prevented from moving freely around the area. It also shows the arbitrary detention of civil society leaders.

“It is now very difficult to find new news from there as the city is under siege and in hands of the police,” said Leao.