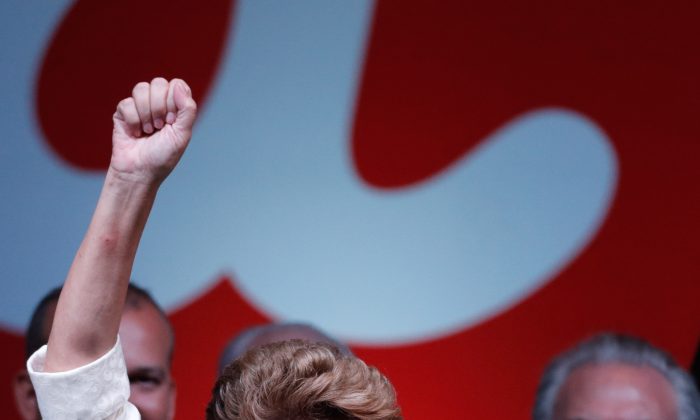 Brazil: Unlikely Any President Would Have Done Better With the Economy

Normally I would not go out of my way to defend a former Marxist guerilla fighter. However, among all the bashing Brazil’s re-elected President Dilma Rousseff is getting, it has to be said other mainstream candidates would not have done any better.

The Brazilian market crashed 5 percent on the news of her re-election before it recovered, down 2.77 percent at the close. Brazil’s currency, the real, weakened 1.7 percent to 2.52 per U.S. dollar, which is a big move for currencies. Ironically, with this move the market alerted us to Brazil’s problem: its relationship to the Fed and the dollar.

Sure, Dilma and her predecessor Lula’s socialist policies, like raising taxes on interest income and spending billions on “social grants,” didn’t help but they only exacerbated the problems of slowing growth, rampant inflation, rising external debt, and a consumer debt bubble.

As for slowing growth—down 0.9 percent in Q2 2014—China is a major culprit. Like Australia, Brazil exports everything from petroleum to iron ore to China and total trade was $83 billion in 2013.

This works great when China is growing at double digits, like it did until 2010, but not when it’s slowing to 7.3 percent, and possibly even lower, as seen in the last quarter. This is unlucky for Rousseff, as she assumed office just when Chinese growth started to level off in the beginning 2011.

Funnily enough, Brazil and China find themselves on the same side of the fence when it comes to U.S. monetary policy. Whereas Brazil has a trade surplus with China and it has a trade deficit with the United States worth $16.5 billion in 2013.

With the Fed dead set on printing money and devaluing the dollar, the trade deficit was only going to get bigger. Also, Brazil receives its oil revenue in dollars and has to convert it back to reals, losing money when the dollar weakens.

Sounds far-fetched? During the time of the Fed’s QE1 and QE2 programs (February 2009 to July 2011) the real appreciated 33 percent, making Brazilian exports uncompetitive and devaluing its oil revenue.

It was then that Brazil took a page out of the Chinese playbook and started printing money itself to absorb the inflows of U.S. dollars looking for yield in the country.

In an effort to weaken its own currency, the interest fell from 12.25 percent in July 2011 to 7.25 in January 2013. The Central Bank of Brazil expanded its balance sheet by 37 percent, mostly by printing real and buying dollars. Lo and behold, its foreign exchange reserves expanded by 52 percent and the currency crashed by 60 percent.

The Chinese have been doing the same thing for over a decade with mixed results. Yes, it boosts exports temporarily but it also has some unpleasant side effects.

The printed money finds its way into the banking system and banks are inspired to make risky loans. In China, this led to overinvestment and overbuilding. In Brazil it led to a consumer credit bubble, with credit expanding from 550 billion real in 2011 to 782 billion in July 2014.

In China, asset prices in the form of real estate went through the roof, in Brazil, we have consumer price inflation at just below 7 percent.

Yes, markets are understandably upset that the more conservative candidate Aecio Neves didn’t win. However, with conservatives and socialists alike standing idly by as central banks around the world print money, it is very doubtful whether he would have done anything different at all.