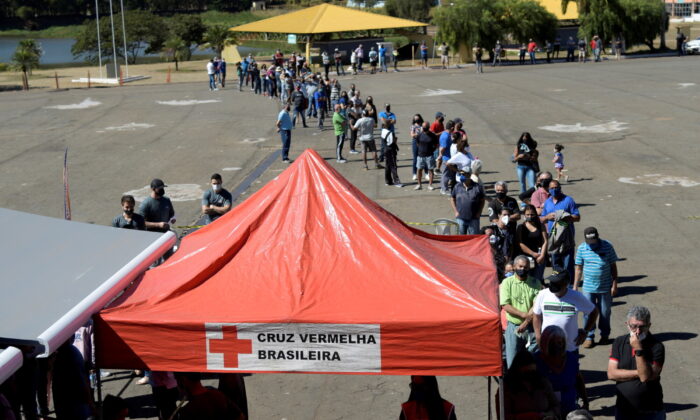 Residents line up in front of the "Busao da Vacina" or Big bus of the vaccine, a project of the Brazilian Red Cross, in partnership with the Minas Gerais state government to vaccinate people against COVID-19 in Ouro Branco, Brazil, on July 19, 2021. (Washington Alves/File Photo/Reuters)
Americas

Brazil’s minister of health announced on Tuesday that the eligibility for COVID-19 booster shots will be extended to everyone older than 18 in the country.

Marcelo Queiroga said that the government will start to offer the third dose to people who have received a second vaccine dose five months ago.

Health officials in the country recently decided to shorten the interval between the second and third dose from six to five months, news agency The Brazilian reported.

The third dose is already available in Brazil for health professionals, senior citizens, and patients with pre-existing conditions. Queiroga previously said that he prefers health workers to be given the Pfizer jab six months after they complete the initial round of COVID-19 vaccination.

The South American country seeks to import more than 100 million vaccine doses by December, mostly of the University of Oxford’s adenovirus-based COVID-19 vaccine AstraZeneca, according to The Brazilian.

The health minister noted that there will be enough doses available for the entire population.

The AstraZeneca vaccine has faced challenges globally around efficacy data, supplies, and links to potentially deadly blood clots. More than a dozen countries paused the use of AstraZeneca’s vaccine earlier this year as a precaution while investigators looked into reported cases of blood clots among vaccinated people.

According to data released by the nation’s ministry of health, the CCP (Chinese Communist Party) virus, the pathogen that causes COVID-19, has killed more than 610,000 people in Brazil since the start of the pandemic. Brazil also has the highest reported caseload in Latin America.

On Monday, the health ministry registered 63 deaths from the CCP virus and 2,799 additional cases.