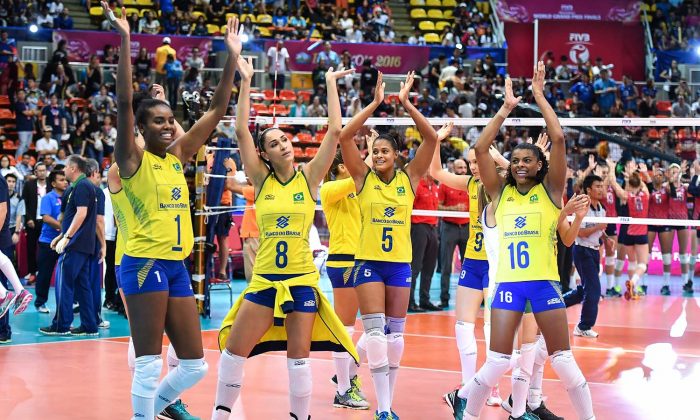 Brazil Throws Down Gauntlet for Women’s Volleyball in Rio

On the results achieved by both USA and Brazil, so far in the the competition, the Final between these two teams was expected to be hard fought and very close. Although USA played China, 3 times in pool matches, Brazil and USA had not met previously in the entire 64 games of the 2016 competition. This final was their only meeting during the tournament, setting up a confrontation between Brazil, 10 times winners of the competition and the defending champions USA.

With Brazil leading the sets 2-1, and looking to have the match under control, USA started the 4th set well, initially edging ahead to 7-6, USA held their own and opened up a small gap to 12-10, Brazil closed the gap and got their noses in front for the first time in the set at 14-13. But USA pulled back to 15-15. The teams stayed within 1 point of each other through to 22-21, USA then opened a gap and took the set 25-22, setting up a deciding set.

In 15 points 5th set, Brazil had the edge in the early stages and extending their lead to 10-5 before pushing on to take the set 15-9.

Great perseverance by Netherlands gave them an astonishing 3rd place win against Russia.

Netherlands fought back from 2 sets down to take the 3rd game 30-28, then won the 4th game 25-21 and pushed home the victory winning a shortened 5th deciding game 15-9 to take 3rd place overall.

No doubt all teams have had an eye on the Olympics whilst competing in this tournament and maybe the China team has been more concerned with preparations for the Olympics. Time will tell in a few weeks in Rio.