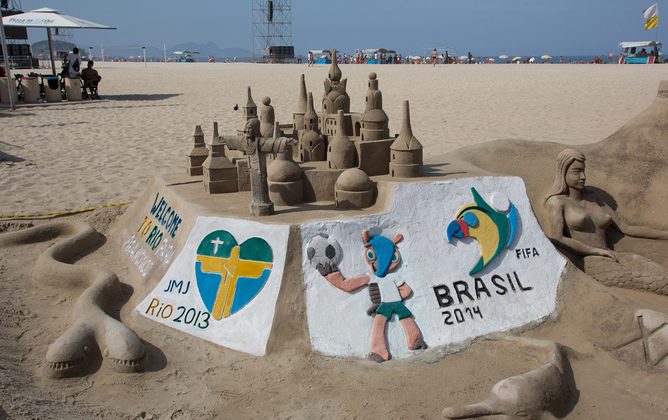 Hopes are high for Brazil as it prepares to host the World Cup and hold an election, but real economic change is unlikely to flow. (BostonCatholic/Flickr, CC BY-ND)
Americas

This year’s FIFA World Cup and the 2016 Olympics seem to be a coronation of Brazil’s undeniable and startling success. But with the Brazilian presidential elections looming later this year, a surge in street protests and growing economic unrest, will Latin America’s largest nation cope under the international spotlight?

Brazil’s economic and social advancements in the last 20 years are indisputable. Since its last external debt default in 1987 and hyperinflation in 1993, the Latin American giant has successfully implemented a macroeconomic plan (the 1994 Plano Real) that set the country in a new direction: steady poverty reduction and a rising middle class; single-digit annual inflation rates; net external creditor position since 2007; over US$350 billion in foreign reserves; declining bottom-line public debt; investment grade credit rating status; and the list goes on.

Above all, worse than these ever-present challenges has been the unfortunate change in the nation’s economic direction in 2006. Shortly before the global financial crisis, a political scandal—with a combustive mixture of sex, money and abuse of power—resulted in the ousting of President Lula’s first treasurer Antonio Palocci.

During his term as treasurer between 2003 and 2006, Palocci, a physician-turned-politician-turned-treasurer, closely followed the economic program initiated by his predecessor (and political opponent), Pedro Malan.

In the “Malocci era” a coherent plan of regulatory-driven reform was implemented, paving the way for the economic and social advancements highlighted above.

Despite the thriving economy, the ousting of Palocci forced a change in economic management direction under the current treasurer Guido Mantega.

Mantega and Palocci represented opposing forces inside President Lula’s administration. Whereas Palocci had advocated that well-regulated market forces are the main driver for economic success, Mantega encompasses the belief that central economic fiddling is the best way to manage the economy.

The King is Dead, Long Live the King!

Under the leadership of Mantega, economic dirigisme gained prominence and was energized under the government of current President Dilma Roussef (Lula’s hand-picked successor). Accordingly, Brazil has lamentably trailed back to economic micro-(mis)management and cronyism.

Now back on the policy menu: the curbing of Brazil’s central bank independence; energy price freezes; stifling local content requirements for the oil industry; discretionary picking-winner strategies; centralization of subsidized public credit loans; and import tariff hikes. In addition, no significant structural reforms have been approved since then.

Despite the poor economic management, Brazil’s presidential elections due later this year are expected to confirm the same pool of policies that are undermining the country’s prospects, even though signs of the economy’s distress are imminent. This is another tragic example of short term populist policies that are disastrous in the medium and long run.

[R]evolution around the corner?

Since July last year a wave of street upheavals protesting various inequalities have spread throughout Brazil. Unfortunately, the phenomenon is divided by too many voices and conflicting requests.

Like the 2011 Occupy protests in several Western cities, vague leadership and the lack of clear demands compromise the effectiveness of the protests. Worse: the very same public, which rightly protests against Brazil’s combination of Scandinavian tax burden levels and sub-Saharan public service delivery, does not support a clear agenda of progressive reforms. In the end, neither revolution, nor evolution, is expected to materialize out of the protests.

So, what can we expect from the FIFA World Cup this year and the Olympics in two years? Lots of Carnival-like parties, sparse protest incidents and incredible sport performances. Not much else, regrettably.

Patrick Carvalho is an associate lecturer of economics at the Australian National University. This article was previously published on TheConversation.com.