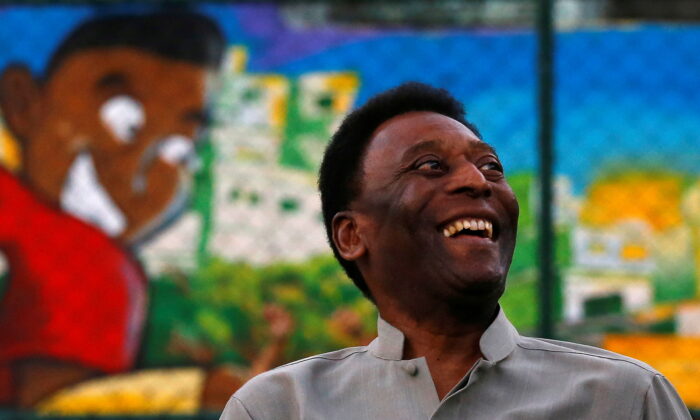 Brazilian soccer legend Pele laughs during the inauguration of a refurbished soccer field at the Mineira slum in Rio de Janeiro, on Sept. 10, 2014. (Ricardo Moraes/Reuters)
Sports

Brazilian soccer legend Pele was hospitalized to undergo treatment for a colon tumor, Sao Paulo’s Hospital Albert Einstein said on Wednesday, adding that he is in stable condition and should be discharged in the next few days.

The 81-year-old three-time World Cup winner underwent an operation to remove the tumor in September and spent nearly a month under care. The hospital said at the time he would need to undergo chemotherapy.

According to Wednesday’s medical bulletin, Pele is continuing his treatment.

“The patient is stable, and the forecast is that he will be released in the coming days,” the statement said.

It gave no details on the seriousness of his tumor or how the treatment is progressing.

Widely considered to be one of the greatest soccer players of all time, Pele has suffered from a series of health issues in recent years. Hip surgery left him with recurring pain and he cannot now walk unaided.

He appeared upbeat in videos taken during his recovery period in September and October and he said on Twitter last month that he was feeling better “every day.”