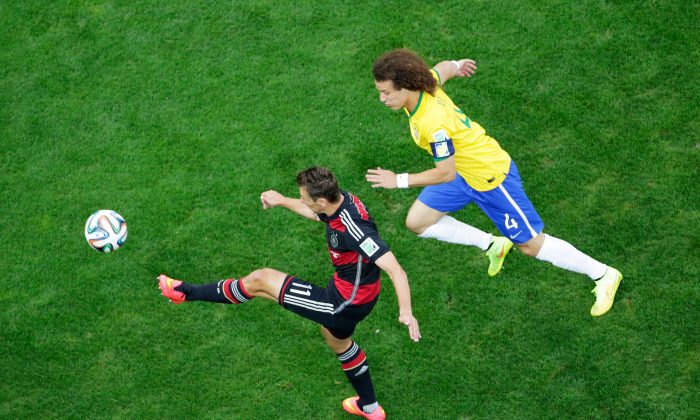 Brazil lost 7-1 against Germany in the World Cup semi-finals, prompting speculation and quips on social media websites that there would be riots after the rout. Many users were spreading photos from several months ago--or even several years ago, falsely claiming rioting was going on during and after the match. (Getty Images)
Soccer

Brazil lost 7-1 against Germany in the World Cup semi-finals, prompting speculation and quips on social media websites that there would be riots after the rout. Many users were spreading photos from several months ago–or even several years ago, falsely claiming rioting was going on during and after the match.

There’s been no reports of rioting in the country or in Belo Horizonte due to the match. On Twitter, a large number of people were joking or commenting about Brazilians engaging in a soccer-related riot after the drubbing, leading to some misconceptions.

Some users were spreading riot photos from months or years ago, saying they were happening outside or in the stadium. Another photo from 2013 is doing the rounds, saying riots are happening now, but that photo is actually from June 2013.  And another photo and tweet falsely claiming there’s riots in Brazil is actually of the riots in London, England in 2011.

Smh all these accounts are tweeting riots have started in Brazil with this picture but this is a pic from months ago pic.twitter.com/UhWc20x8FF

There are NO RIOTS in Brazil due to the match. The image doing the rounds is from June 2013. RT to spread awareness: pic.twitter.com/C0Ne7tyNDo

A New York Times reporter, Simon Romero, tweeted a photo of fans gathered around in Sao Paulo burning a flag of Brazil during the match on Tuesday. “Brazil fans burn flag in São Paulo’s Vila Madalena district,” he wrote in the tweet. But it’s unclear if the fans actually started a riot or were involved in any unrest.

Photos uploaded to Twitter also show Brazil fans walking out of the stadium in Belo Horizonte during halftime.

According to The Mirror, the Brazilian government feared rioting if the team was knocked out of the World Cup match against Colombia last week. Brazil, however, prevailed but the government stationed military troops around the Estadio Castelao.

At the time of the Brazil-Colombia match, even the bomb squad was in Rio. “Handling those types of bombs are the responsibility of the Armed Forces, but we have the training to deal with them,” said Ellington Cacella, who is an inspector with the Bomb Squad in Rio, according to the paper last week. “In Brazil it’s more common to find IEDs and grenades. But we have to be ready for whatever comes our way.”

It’s unclear if the same level military or police presence is in Belo Horizonte, where the Germany-Brazil match is located.

There were riots in mid-June after England lost to Uruguay, ending its World Cup dreams. Men in black threw explosives or fireworks into a bar with England supporters in Sao Paulo, reported the UK Telegraph on June 19. And a few hours later on the same day, about 2,000 Brazilian protesters carried out a demonstration over transportation.

Klose put Germany ahead 2-0 in the 23rd minute for his 16th career World Cup goal in his fourth tournament. It broke the mark of 15 goals he shared with Brazil’s retired star Ronaldo.

The 36-year-old Lazio striker also scored in Germany’s 2-2 draw with Ghana in a group match when he came off the bench to get Germany back into the contest.

With 71 goals in 136 matches, Klose is Germany’s all-time top scorer, having beaten the record previously held by Gerd Mueller.

Germany was up 5-0 after just 30 minutes of Tuesday’s game.