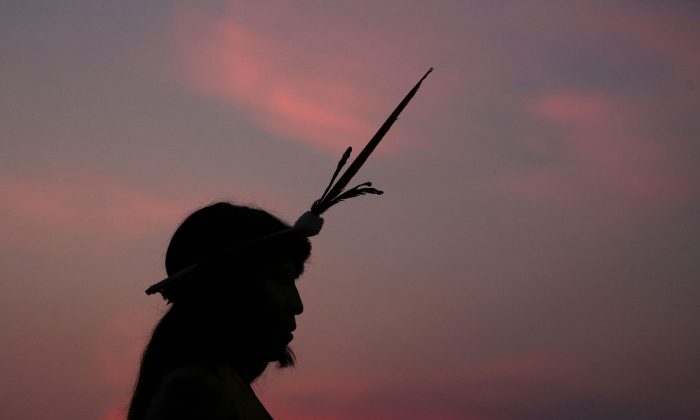 A Brazilian Xavante indigenous man attends the World Indigenous Games in Palmas, Brazil, on Oct. 22, 2015. Of the estimated 2,000 indigenous languages thought to have been spoken in pre-Columbian times in what is now Brazil, only around 160 survive today. Experts warn that as many of 40% of those remaining could be lost in the next few decades, as elders die off and young people get more access to television, the Internet and cell phones. (AP Photo/Eraldo Peres)
Americas

PALMAS, Brazil—Guaricema Pataxo’s indigenous roots are the cornerstone of her identity. The 53-year-old great-grandmother lives on her Pataxo people’s reservation and makes a living by hawking their handicrafts, fully decked out in traditional regalia.

But ask her to speak Pataxo, and she can only stumble through a few basic words and phrases.

Her situation is not unusual.

Of the estimated 2,000 indigenous languages thought to have been spoken in pre-Columbian times in what is now Brazil, only around 160 survive today. Experts warn that as many as 40 percent of those remaining could be lost in the next few decades, as elders die off and young people get more access to television, the Internet and cellphones.

Of the estimated 2,000 indigenous languages thought to have been spoken in pre-Columbian times in what is now Brazil, only around 160 survive today.

The pace of change has been accelerated by big agriculture’s push into the hinterland, bringing roads, electricity and outsiders to areas with a high concentration of indigenous people.

A program spearheaded in part by UNESCO, the U.N.’s cultural and educational agency, aims to give a fighting chance to nearly three dozen threatened languages. Over nearly eight years, the program has helped 35 tribes to transcribe their languages, develop dictionaries and teaching tools for children and document their rich oral traditions.

“We used to learn our language and the stories of our people with our elders,” said Elly Mairu Karaja, of the Karaja people of central Brazil, a schoolteacher who’s worked with the program. “But now, with technology, the youngsters are living in the white world even while they’re on our land. There are many now who don’t want to be indigenous anymore.”

Along with the problem of anemic interest from younger generations, demography itself is playing against the survival of many indigenous languages, said Jose Carlos Levinho, director of Rio de Janeiro’s Indian Museum, which ran the project with Brazil’s indigenous affairs agency.

While the country’s indigenous population is thought to have numbered from 3 million to 5 million in pre-Columbian days, five centuries of disease, violence and poverty have whittled that to under 1 million. Now, Brazil’s original inhabitants make up less than 0.5 percent of this country of 200 million.

The indigenous population is splintered into 305 tribes, some with just several dozen or fewer members.

“In Brazil, nearly 40 percent of indigenous nations have fewer than 500 members,” said Levinho. “Studies have shown that these days, such small populations aren’t able to preserve their languages.”

In Brazil, nearly 40% of indigenous nations have fewer than 500 members. Studies have shown that these days, such small populations aren’t able to preserve their languages.
— Jose Carlos Levinho, director, Indian Museum of Rio de Janeiro

Portuguese is now the first language of most members of the Pataxo nation, including handicraft vendor Guaricema Pataxo.

“Our people often leave our lands to study outside and they meet lots of people and end up marrying white people, and it all gets more and more diluted,” said Pataxo, who has two children, five grandchildren and two great-grandchildren, none of whom speak the tribe’s mother tongue.

The Pataxos’ ancestral home is along Brazil’s Atlantic coast and there are historical accounts of association between the tribe and Europeans dating back to the 1500s. Five centuries of contact, including efforts to “civilize” the Pataxo by removing their children and forbidding them from speaking their language, took a toll. Of today’s remaining 13,000 Pataxos, only around 1,600 are thought to speak the group’s native tongue.

“I don’t feel good” about not speaking Pataxo, the handicraft vendor said as she peddled seed necklaces at the recent World Indigenous Games in the central city of Palmas. “I would feel better if I had learned.”

Under the program to save indigenous tongues, specialists were dispatched country-wide to train a hand-picked cadre of tribe members to collect archival materials such as videos of traditional ceremonies where the old languages are used and to help transcribe languages that were exclusively oral.

Transcription “is a long, tense, difficult process,” said museum director Levinho. “It involved heated internal negotiations among the tribes .. There are lots of fights, lots of discussions.”

The team also faced practical hurdles, such as a flu outbreak near the beginning of a 2008 project that closed indigenous lands to outsiders, and threats of violence from farmers trying to drive indigenous people from their lands.

Despite the difficulties, UNESCO’s director general, Irina Bokova, said the project was a success during a recent trip to Rio de Janeiro.

Still, Levinho says he has little hope of making much of a dent in linguists’ prognosis that dozens of native Brazilian languages could become extinct within 20 years.

“I don’t see much changing this picture,” said Levinho. “We’d need to see a big investment . to grapple with the problem.”

For Yamalui Kuikuro, of the Kuikuro people from the central Mato Grosso state, where soy, cotton, corn and cattle have begun to replace forests, the disappearance of an indigenous language marks the beginning of the tribe’s end.