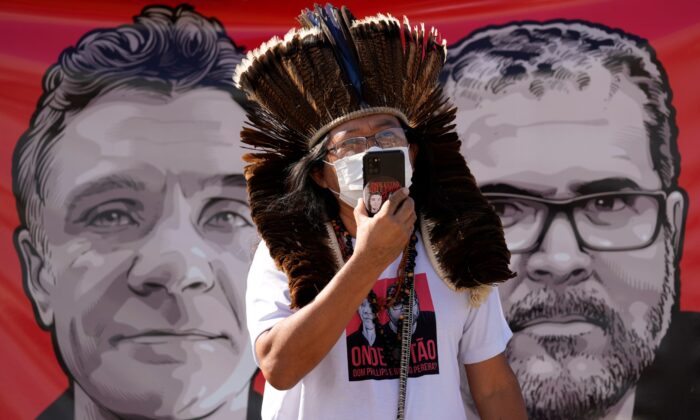 Indigenous leader Kamuu Wapichana is backdropped by a banner that shows images of missing freelance British journalist Dom Phillips (L) and Indigenous expert Bruno Pereira, during a protest asking authorities to expand the search efforts for the two men, in front of the Ministry of Justice in Brasilia, Brazil, on June 14, 2022. (Eraldo Peres/AP Photo)
Americas

BRASILIA, Brazil—Brazil’s federal police said Saturday that a third suspect in the deaths of British journalist Dom Phillips and Indigenous expert Bruno Pereira has been arrested. The pair went missing almost two weeks ago; Phillips’ killing was confirmed after forensic exams; other remains are believed to belong to Pereira.

Police said in a statement that Jefferson da Silva Lima, known as Pelado da Dinha, turned himself at the police station in Atalaia do Norte in the Amazon.

Police said the suspect will be referred to a custody hearing.

Phillips and Pereira were last seen on June 5 on their boat on the Itaquai river, near the entrance of the Javari Valley Indigenous Territory, which borders Peru and Colombia.

On Friday, federal police said that human remains found in Brazil’s remote Amazon have been identified as belonging to Phillips, 57.

Additional remains found at the site near the city of Atalaia do Norte have not yet been identified but are expected to belong to Indigenous expert Pereira, 41.

“The confirmation (of Phillips’ remains) was made based on dental examinations and anthropological forensics,” Federal Police said in a statement. “Work is ongoing for a complete identification of the remains so we can determine the cause of death, and also the dynamics of the crime and the hiding of the bodies.”

The remains were found on Wednesday, after fisherman Pelado confessed to killing the pair, and took police to the place where he would have buried the bodies. He told officers that he used a firearm to commit the crime.

The remains had arrived in the capital city of Brasilia on Thursday for forensics to work.

The area where Phillips and Pereira went missing has seen violent conflicts between fishermen, poachers, and government agents.