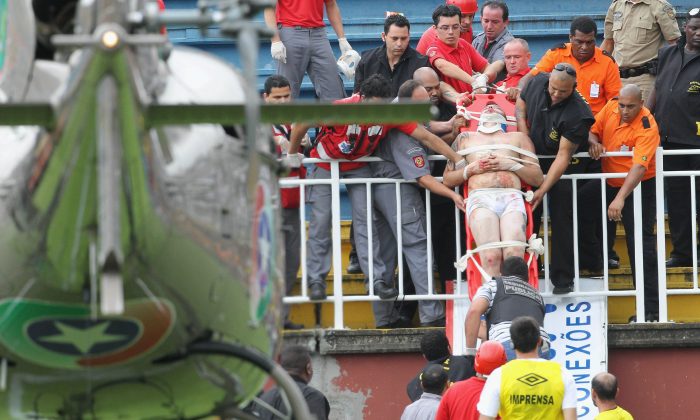 An injured fan is carried on a stretcher after clashes with team fans during a Brazilian league soccer match between Atletico Paranaense and Vasco da Gama in Joinville, southern Brazil, Sunday, Dec. 8, 2013. A key Brazilian league match was stopped Sunday after fans started fighting in the stands and a helicopter had to land on the pitch to airlift a seriously injured man. A doctor said two other fans were hospitalized in serious condition and one was treated for a minor injury at the stadium. (AP Photo/Carlos Moraes, Agencia O Dia)
Sports

A massive soccer (football) fight in Brazil left dozens injured during a match between Vasco da Gama and Atlético Paranaense in the Joinville Arena in Santa Catarina state.

One witness said that a man was killed and several were gravely injured, but reports later one said that there were no deaths.

The brawl appeared to break out in the stands as the game was going on. The game was stopped.

A man was taken to the hospital via helicopter and two others are said to be critically injured.

“This is deplorable,” Vasco da Gama coach Adilson Batista told The Associated Press. “It’s sad to see images like these just before the World Cup in our country. I’m shocked, this is not sport.”

Atletico Paranaense defender Luiz Alberto told AP that he was on his knees crying when the incident took place. He said, “We tried to tell the fans to stop because things would only get worse. We looked at the stands and there were no cops. There was nobody there to stop the fighting. I’m playing for 20 years and I’ve never seen anything like this in person. We will have a World Cup in our country and we know these images will be shown everywhere.”

According to the Mirror, there were riot police armed with shotguns on the scene, and reports said they were firing rubber bullets.

SAO PAULO — A key Brazilian league match has been stopped after fans started fighting in the stands and a helicopter had to land on the pitch to airlift a seriously injured man. Another fan was taken to a hospital in an ambulance.

Supporters from Atletico Paranaense and Vasco da Gama charged against each other during Sunday’s match in the southern city of Joinville and it took several moments for police to intervene. Groups of fans punched and kicked each other several times until police arrived and fired rubber bullets to contain the altercation.

The match is important for both teams as Atletico Paranaense is trying to secure a spot in next year’s Copa Libertadores and Vasco da Gama, a four-time Brazilian champion, is trying to avoid relegation.

Fan violence has been rampant in Brazil this year and is a concern ahead of the World Cup.