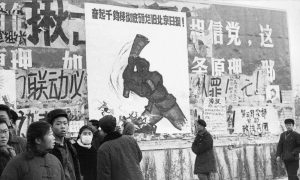 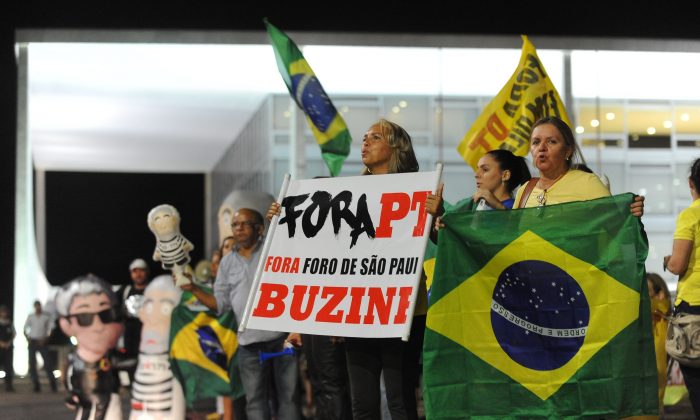 Demonstrators protest against former president Luis Inacio "Lula" da Silva and his Workers' Party (PT) in front of Planalto Palace in Brasilia on March 4, 2016. Both Lula and his successor Dilma Roussef have been marred with corruption. (Andressa Anholete/AFP/Getty Images)
Viewpoints

Brazil Has Not Learned Its Lesson

Just when you think Brazil has turned the corner and rejected a corrupt political class, you find out the slate of presidential candidates for October’s national elections. The most popular candidate is an incarcerated criminal ex-president, with a further six charges pending. The precious couple of change-makers in the race have a near-zero chance of prevailing.

The cliche tells the tale: Brazil is the nation of the future and always will be. For all her enormous natural-resource wealth and cultural dynamism, that potential can never be realized, so long as thieves at the top destroy incentives for productive business and foreign investment.

The accelerating brain drain, as reported this month in The Wall Street Journal, is testament that this time is worse than before. Even the wealthiest are overwhelmed now with out-of-control crime and a bleak political future. Recent polling suggests 43 percent of adult inhabitants want to leave, and the level reaches 62 percent among young adults aged 16 to 24. That equates to 70 million in total who want to leave.

Glenn Greenwald, a U.S. journalist and lawyer who now lives in Rio de Janeiro, has described the 2018 election as “disastrous.” Anyone who favors an open, transparent society will agree with him.

One might wonder how, for example, Luiz Inácio da Silva (also known as Lula) of the Workers’ Party can still be under consideration. President from 2003 to 2011 and guilty of taking bribes for state construction contracts, he rode a wave of high commodity prices and diverted much of the returns to unsustainable welfare programs that ensured his popularity, although some supporters have moved on.

Lula’s lawyers are working furiously to overturn his conviction, although that turnaround seems doubtful this late in the game. His incarceration just means that former São Paulo Mayor Fernando Haddad will likely step in, as will Haddad’s chosen vice-presidential partner, Manuela D’Avila, a longtime member of the Brazilian Communist Party.

The fact that Lula still has the support of one-third of the electorate—among 13 announced candidates—signals a stagnant, unimaginative political class and, sadly, a dependent electorate unwilling to accept fiscal austerity. Lula is polling comfortably ahead of his nearest opponent, Congressman Jair Bolsonaro, who sits at 20 percent.

Even if Bolsonaro fancies himself a maverick outsider, somewhat akin to U.S. President Donald Trump, that is more branding than reality. Running on the relatively unknown Social Liberal Party ticket, he has been in the Chamber of Deputies for almost three decades, since 1991, and for five different parties. Some classical-liberal and law-and-order voters support him, but this amounts to little, given the electoral system and the popularity breakdown.

Progressives Will Unite for Runoff

There is still a lot of movement at play, given so many candidates in the running. Observers need to keep in mind that if no candidate surpasses 50 percent on Oct. 7, which is the most likely outcome, the top two will proceed to a runoff on Oct. 28. (Gubernatorial candidates are also subject to the runoff, if necessary.) Should Bolsonaro be one of them, four-fifths of the electorate will almost certainly unite against him. They will get behind the Workers’ Party candidate or—assuming Lula fails to get on the ballot—the other progressive candidate to take second place.

The swath of opposition to Bolsonaro, not immediately apparent, is because the progressive or socialist side is fragmented across so many candidates. The list includes Congressman Ciro Gomes, a former Lula minister; and Marina Silva, a former Green Party senator now running for the new Sustainability Network.

That means Brazilians are stuck with a runoff between two of the following: Lula, Haddad, Silva (who could overtake Haddad), Bolsonaro, or perhaps Geraldo Alckmin, who is president of the status quo Social Democracy Party and was, until recently, governor of São Paulo.

Polling at about 10 percent, Alckmin is the “the ultimate establishment figure … the ultimate guardian of the status quo and the prevailing order,” writes Greenwald. He is “a somewhat more conservative, cautious version of Hillary Clinton … around politics for decades, funded by and serving corporate interests, inoffensively occupying every conceivable office … feeding off of the … corruption that greases the wheels of Brazil’s political class.”

Alckmin is on the rise, however, and could still make the cut and push out Bolsonaro. Alckmin has a coalition and plenty of press backing, and he wouldn’t have relinquished his role as chief of the nation’s wealthiest and most populous state if he weren’t confident of pulling through.

Time to Look in the Mirror

What about the incumbent party of President Michel Temer, you might ask?

This is going to hurt some feelings, but the highly touted victory over corruption in 2016 was meager at best—merely a new coat of paint. At that time, in the wake of mass protests, a bunch of shamelessly corrupt politicos saw that then-President Dilma Rousseff was vulnerable. She had her share of corruption, no doubt, but so did they, yet they feigned righteous indignation and had her removed.

This has all become apparent since then, as Temer has been awash with corruption—caught red-handed ordering bribes—not that he was alone. He and his right hand, Eduardo Cunha, both were in on it. Cunha, who led the impeachment proceedings against Rousseff, is now imprisoned for his role in the bribery scheme, while Temer has refused to step down and has evaded prosecution.

Henrique Meirelles, the presidential candidate for Temer’s Democratic Movement Party, has taken much of the brunt for this and seemingly doesn’t stand a chance. While he is polling in the low single digits, the tragic fact is that almost all political parties in Brazil had a role to play in the Petrobras and Odebrecht corruption scandal. It was the largest in the nation’s history, and it spilled over into many other countries.

Even more tragic is that Brazilians do not appear to have learned from these developments. Reported unemployment has remained stubbornly above 12 percent all year, and the general populace yearns for what they perceive to be an outsider—fueling support of Bolsonaro and Lula’s competitors on the progressive side. However, they also stand in opposition to much-needed fiscal austerity.

One of the few noble things to pass under Temer’s watch has been a 20-year constitutional spending cap: Federal spending can only grow at the rate of the previous year’s inflation. Rather than garnering support, however, this has been extremely unpopular and has contributed to Meirelles’s pitiful polling numbers.

There is a new classical-liberal party on the scene, NOVO, and its candidate is João Amoêdo. You can guess how popular he has been, as most polls have ignored his presence. His support, or lack thereof, testifies to the unwillingness of Brazilians to accept a more limited state.

That is why no major party leader has dared to advocate for free-market policies, the very policies that would deliver competitiveness and suffocate corruption. Brazilians may detest the idea of corrupt, establishment parties, but cognitive dissonance reigns, and they appear to detest economic liberalism even more.