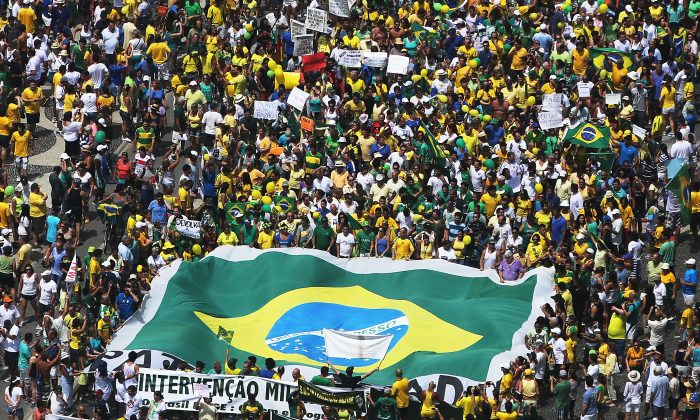 Anti-government protesters march carrying a Brazilian flag along Copacabana beach in Rio de Janeiro, Brazil, on March 15, 2015. Millions protested across the country against President Dilma Rousseff's government and the ruling Workers' Party, with many calling for Rousseff's impeachment. A massive corruption scandal at Brazil's state-owned oil company Petrobras has rocked the government and Dilma's approval ratings—now below 8 percent. Brazil's inflation rate has hovered around ten-year highs recently while the currency, the Brazilian real, has passed twelve-year lows when measured against the U.S. dollar. (Mario Tama/Getty Images)
Americas

Brazil, world-famous for its carnival celebrations in Rio and elsewhere, is canceling the festivities this year. As the Financial Times reports, across the country towns and cities “are being forced to scrap the annual carnival parade as the country is braced for what is expected to be the worst recession since at least the 1930s.”

With “unemployment and inflation rising, and President Dilma Rousseff’s government mired in the biggest corruption scandal in the country’s history, Brazilians are in no mood to party.”

It is a shame that the hard-working people of Brazil have to suffer the consequences of such bad governance.

The scandal at state-owned energy corporation Petrobras, Brazil’s largest company, is so bad “that a government bailout for the country’s troubled state-controlled oil company can’t be ruled out,” according to the Wall Street Journal.

Brazil has registered steadily declining scores in recent editions of the annual Index of Economic Freedom, dragged down by too much government spending, corruption, and regulatory inefficiency.

As the Financial Times goes on to note, “Rousseff’s ruling Workers’ party, emboldened by the proceeds of the commodities boom, spent much of its past 13 years in power pursuing populist and expansionary fiscal policies, but ignoring what economists say are the wider structural reforms needed for sustainable growth.”

It is a shame that the hard-working people of Brazil have to suffer the consequences of such bad governance. Maybe the absence of partying this summer in Brazil—and a period of sober reflection—will drive home the need for reform.

James M. Roberts is the research fellow in Freedom and Growth at The Heritage Foundation’s Center for International Trade and Economics. Roberts’ primary responsibility is to produce the Index of Economic Freedom, an influential annual analysis of the economic climate of countries throughout the world. Copyright The Daily Signal. This article was originally published on The Daily Signal.