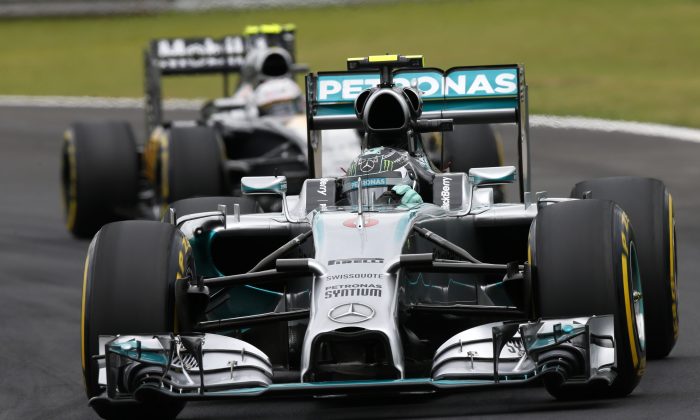 The Brazil Grand Prix is set for Sunday in Sao Paulo.

RTL in Ireland, TSN in Canada, OTE TV in Greece, on M1 in Hungary, Sky F1 in Italy, MTV Max in Finland, Polsat Sport in Poland, SLO 2 in Slovenia, Sport1 in The Netherlands, BBC in Belgium, RTL or Sky Deutschland in Germany, Nova in the Czech Republic, TV3+ in Denmark, SportTV in Portugal, Abu Dhabi Sports 2 in the United Arab Emirates, and Star Sports 4 in India are among the other broadcasters.

The Brazil Grand Prix is the second-to-last race of the season.

The last will be the Abu Dhabi Grand Prix on November 23.

See qualifying results, driver standings, and a preview below.

See an Associated Press preview below.

SAO PAULO—Nico Rosberg edged Lewis Hamilton to take pole position for the Brazilian Grand Prix on Saturday, moving into a good position to close in on his Mercedes teammate in the Formula One title race.

Rosberg was fastest with a lap of 1 minute, 10.023 seconds at Interlagos, just 0.033 seconds ahead of Lewis Hamilton. Local favorite Felipe Massa was third and his Williams teammate Valtteri Bottas finished fourth.

Rosberg had already led Hamilton in all three practice sessions this weekend. He trails his teammate by 24 points in the overall standings and needs to win in Brazil on Sunday to have a real shot at his first title. The championship can’t be decided at Interlagos because the season-ending race in Abu Dhabi later this month will be worth double points.

It was the 10th pole position for Rosberg in 18 races this season.

“Up until now, it’s been going well,” Rosberg said. “It’s the best place to be in (Sunday), but I need to make it happen in the race, unlike in Austin, for example.”

Rosberg also started ahead of Hamilton in the U.S. Grand Prix in Texas’ capital last weekend, but wasn’t able to stay in front of his rival during the race, losing even more ground in the title race.

“I learned from Austin. I know what I need to do better,” the German driver said. “So from that point of view, good to go tomorrow.”

Hamilton, who has won five races in a row, just missed on his chance to beat Rosberg for the pole in Brazil after locking his right-front tire in his final qualifying lap. He was trying to win his eight pole position of the year.

“I lost a little bit of time in turn 10,” Hamilton said. “Of course, pole position is the best place to start here, but it’s a long race tomorrow. I want to win, just as much as anyone else.”

Massa said his chances to get closer to the Mercedes were hurt by problems getting the car started for his final qualifying attempt, which left him in the middle of traffic when he was back on the track.

“Very emotional to be here in Brazil and to have a competitive car and start in the top three,” he said. “I hope it’s just the start of a good result for us tomorrow as well.”

Sebastian Vettel, who won the race at Interlagos last year, had mechanical problems early and just barely made it past the first qualifying session, but he was still able to guarantee sixth place on the grid, one spot ahead of Jenson Button of McLaren. Button’s teammate, Kevin Magnussen, was seventh fastest.

Hamilton can clinch the title with consecutive second-place finishes in the last two races, or by coming third in Brazil and second in Abu Dhabi on Nov. 23.

Mercedes has finished 1-2 in 10 of the 17 races this year, and clinched the constructors’ championship with three races to spare. It has 14 victories between the two drivers, one short of the season record shared by Ferrari and McLaren.

Hamilton is going for his 11th win of the season. Rosberg has four victories, but none since the German GP in July. Neither driver has won in Brazil.

The times fell considerably compared to previous years because the track was completely resurfaced for this year’s race. The pole time was just short of the track record of 1:09.822 set by Rubens Barrichello with a Ferrari in 2004. Rosberg’s lap was the fastest for a pole position, though, ahead of Barrichello’s 1:10.646 that same year. The fastest lap in a race (1:11.473) was set by Juan Pablo Montoya in 2004 with a Williams.

There will be only 18 cars on the grid for the second race in a row. Marussia was shut down on Friday, while Caterham has a crowd-funding project underway to try to return to the grid in Abu Dhabi.