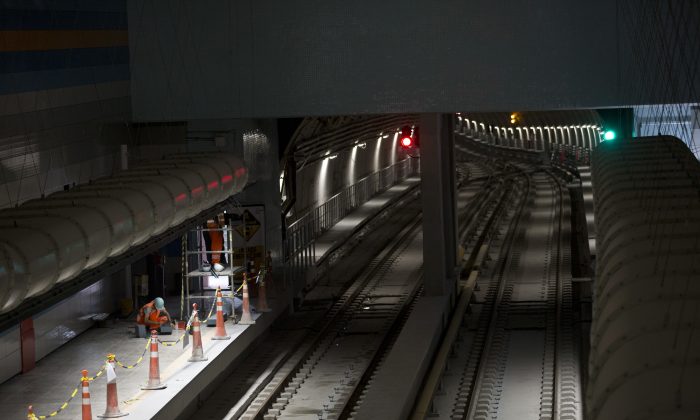 Odebrecht personnel work on the Line 4 of the subway that is under construction in Rio de Janeiro, Brazil, on July 7, 2016. (AP Photo/Silvia Izquierdo)
Sports

RIO DE JANEIRO—Brazil’s highest officials celebrated the completion of a much-delayed $3 billion subway expansion that will play a crucial part in the Rio de Janeiro Olympics, holding a ribbon-cutting ceremony Saturday just days before the games are set to kick off.

The new Line 4, billed as the most important infrastructure project linked to the Olympics, will transport hundreds of thousands of athletes and fans between the city’s iconic beaches and Barra da Tijuca, which is home to the Olympic Park and most sporting venues.

“What was done here was a miracle,” Rio Mayor Eduardo Paes said, praising the subway line which traverses 10 miles of tunnels and verdant hills, through shantytowns and high-end beach neighborhoods.

The project has been fraught with problems, with repeated delays to the launch date and costs nearly doubling from the initial estimate. Only two months ago, problems securing final financing sowed doubts that the expansion would be ready on time.

In June auditors and experts worried that the delays could compromise safety testing, and an organization of railway specialists filed a complaint asking a judge to postpone the opening until the project was inspected by independent firms. The judge asked the state government earlier this month for more information on the tests that were conducted; the case is still pending.

But officials were all smiles during the ceremony, taking photographs, laughing and hugging as they prepared to board the train for its inaugural voyage. The 15-minute ride covers a stretch of Rio that usually takes more than an hour to cross by car, via a congested highway that runs through hills and tunnels.

“Rio will show the world all that Brazil is capable of achieving,” acting President Michel Temer said.

The line will begin carrying athletes, Olympic staffers and ticket holders on Monday in trains departing every eight minutes, and will be open to the general public after the games are over.

There have been bumps in the road for other areas of Olympic construction.

A new bike lane collapsed after being struck by a large wave in April, killing two joggers.

And last week, teams arriving to the Olympics complained about water and gas leaks, blocked toilets and electrical problems at the athletes’ village.