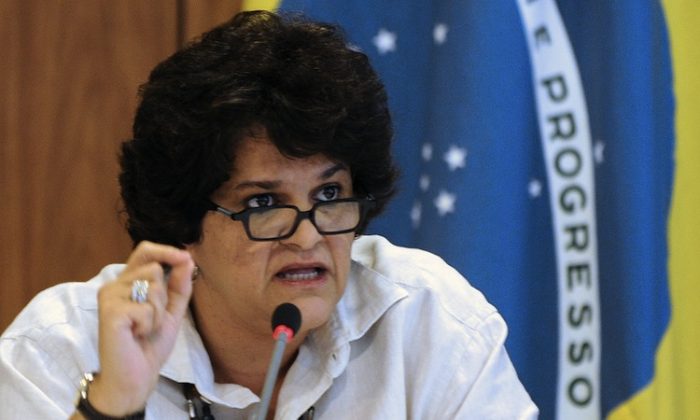 Part of the construction site at the Belo Monte Dam complex in the Amazon basin is seen on June 15. (Mario Tama/Getty Images)
World

ITATIBA, Brazil—Brazil is stepping up its efforts to halt the illegal deforestation of the Amazon rainforest.

Some of the deforestation is because of drought due to warming temperatures; however, increased mining and illegal logging and land grabbing are also major factors.

The IBAMA pursued 226 illegally grabbed properties between August and September, seizing 75,120 acres of land, an area equivalent to close to 58,000 football fields, while issuing 216.3 million reals ($106.3 million) in fines. The institute also seized 10,600 logs and 4,400 cubic meters of processed wood.

“The environmental crime is becoming more sophisticated,” Teixeira said according to a news release put out by the ministry.

“To fight it, we are modernizing our system of control,” she added, referring to the creation of the joint force that will take advantage of the strengths offered by the different departments.

The ministry announced that it is also changing its process of adding Amazon areas in danger of excessive deforestation to a prioritized watch list, making the timeline shorter before the area is chosen for closer monitoring.

“[The list] will include municipalities with more prevalent deforestation,” Juliana Simões, project manager for the Department of Policies to Combat Deforestation (CPPD) of the Ministry of the Environment, said in a statement.

According to Philip Fearnside, a researcher with the National Institute for Amazonian Research, deforestation of the Amazon has a number of adverse impacts on ecosystem services.

“These services include maintenance of biodiversity, water cycling, and carbon stocks that reduce the greenhouse effect,” Fearnside wrote in an article published in Acta Amazonica in 2006. He confirmed to The Epoch Times that the article is still accurate.

With deforestation, sustainable use of timber and nontimber forest products—such as resins, fruits, honey production, to name a few—would be lost, Fearnside wrote. Deforestation also results in loss of biodiversity and the extinction of flora and fauna, and other effects whose extent might not be fully known at this time.

Deforestation also affects the water cycle in different regions, particularly the rainfall in south-central Brazil. As there are fewer trees, the volume of carbon captured by the forest is also adversely affected.

Fearnside said while turning areas of the Amazon into cattle pasture might turn up some profit, the costs of deforestation are much higher.

“The potential value of not deforesting each hectare is much greater than the value that can be gained by selling traditional goods like wood and beef,” Fearnside wrote.