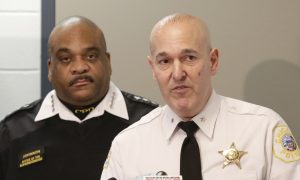 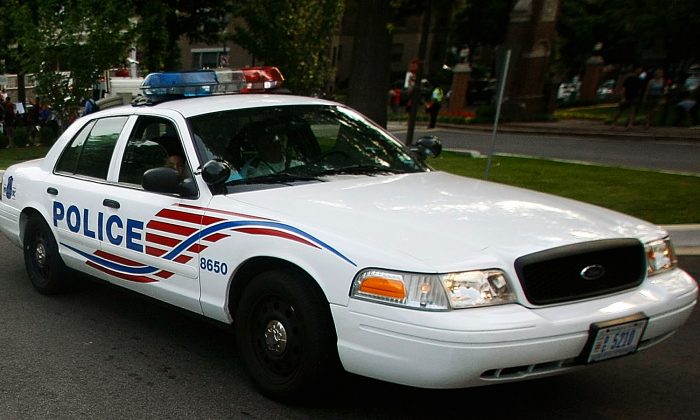 Who do the police call when a patrol car is burglarized? (Mark Wilson/Getty Images)
Crime and Incidents

A man has been caught on video breaking into an unlocked car parked in front of a home in Pembroke Pines, Florida.

The brazen thief made three separate trips, loading up on loot each time, then coming back for more.

The bit of information which could make the whole affair seem comical? The car in question was a marked police cruiser from the city of Opa-Locka.

What makes it very serious is that along with a taser, a bulletproof vest, and some pistol ammunition, the thief got away with a powerful AR-15 assault rifle with three fully loaded magazines.

The police department released a statement which said in part, “We believe this suspect is responsible for additional vehicle burglaries which occurred in the area on the same night.”

“This is a very brazen burglar to have targeted a marked police vehicle,” Capt. Al Xiques, a spokesman for the Pembroke Pines Police Department, told Local 10 News.

Do you recognize this burglar who stole a firearm & gear from a marked Opa Locka PD vehicle in the Sunswept community? He is a black or Hispanic light-skinned male with a distinctive tattoo on his right arm. Call 911 with any info! Surveillance ? here: https://t.co/VBmD7P3PC1 pic.twitter.com/0Af2Zr7uF7

A neighbor’s video camera captured the young man approaching the patrol car, parked in the driveway of an off-duty officer’s home in the Sunswept neighborhood of Pembroke Pines, at about 3:20 a.m. on Dec. 5.

Opa-locka Police Chief James Dobson told LocalNews 10 that it is normal for officers to keep weapons and ammunition in the locked trunk of their patrol cars when off-duty. The trunk of a patrol car cannot be opened from inside the car; it can only be opened with a special key.

Dobson did not address how the thief got the trunk open or how he got access to a powerful rifle and ammunition. He did say that the officer was not under investigation.

“He did everything that needed to be done,” to secure his gear, Chief Dobson said. “He was actually fine with what he did with the weapon.”

“Our main concern right now is to get that weapon off the street and back in hands of the police department,” Chief Dobson added.

A Happy Ending of Sorts

The Pembroke Pines PD posted on Twitter and Facebook that around 10 a.m. on Dec. 7 the suspect, 16-year old Christopher Clarke, turned himself in to the Hallandale Beach Police Department. His friends and family, seeing his picture being circulated widely, urged him to surrender himself, the police said.

16-year old Christopher Clarke has been taken into custody after turning himself in to @HallandaleBchPD after his image was circulated on the news. He has been transported by our detectives to the Juvenile Assessment Center (J.A.C.). More info here ➡️ https://t.co/QljzUqzw1n https://t.co/tir60oB8aZ

“Our agency is still in the process of recovering the stolen firearms and police gear, and this is considered to be an active investigation,” read the updated statement.

“We want to thank our media partners for highlighting this story which continues to present a possible danger to the public until these firearms and gear are recovered. We are continuing to ask for assistance from the community in obtaining information regarding additional individuals and associates who were involved in this crime.”

While young Mr. Clarke, who is currently incarcerated in the Juvenile Assessment Center, will certainly face some penalties for his bold and foolish theft, things could have gone much worse for him. Had the stolen firearm been used in a crime, the penalties facing him would certainly be much harsher.

Hopefully, Christopher Clarke will realize he got lucky, and straighten out his life.

And hopefully, the officer who forgot to lock his patrol car will think about how lucky he is, that this incident ended peacefully.

Do you think Christopher Clarke should be shown leniency because he turned himself in? Do you think he should be tried as an adult? Post your comments below.