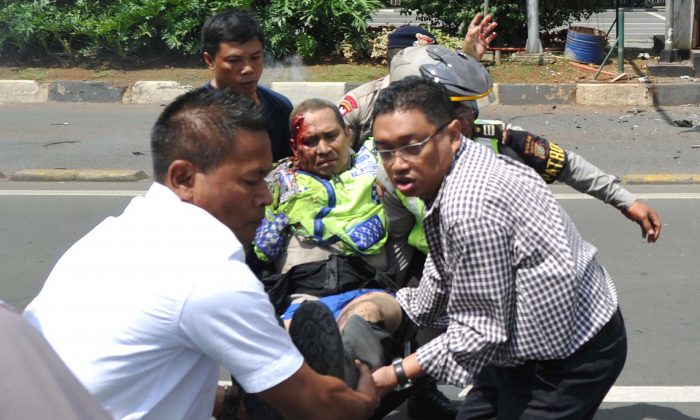 People carry an injured police officer near the site where an explosion went off at a police post, rear, in Jakarta, Indonesia Thursday, Jan. 14, 2016. Attackers set off explosions at a Starbucks cafe in a bustling shopping area in Indonesia's capital and waged gunbattles with police Thursday, leaving bodies in the streets as office workers watched in terror from high-rise windows. (AP Photo)
Asia & Pacific

JAKARTA, Indonesia (AP) — The scene had echoes of the Paris attacks: A bustling shopping area shaken by the blasts of suicide bombers and gunfire as onlookers fled in terror.

But when Thursday’s assault in central Jakarta was over, the death toll was far lower. Of the seven killed, five were the attackers themselves and only two were civilians — a Canadian and an Indonesian. Another 20 people were wounded.

Still, authorities and analysts believe the violence that left the city of 10 million on edge for hours was a loud announcement of the Islamic State group’s presence in the world’s largest Muslim-majority nation.

Supporters of the Islamic State group circulated a claim of responsibility on social media resembling the militants’ previous messages.

The attackers carried handguns, grenades and homemade bombs and struck a Starbucks cafe and a traffic police booth in the Indonesian capital’s highest-profile attack in six years.

Authorities said they found a large, undetonated bomb and five smaller devices in a building near the cafe.

“So we think … their plan was to attack people and follow it up with a larger explosion when more people gathered,” said Maj. Gen. Anton Charliyan, the spokesman of Indonesia’s national police. “But thank God it didn’t happen.”

Jakarta police chief Maj. Gen. Tito Karnavian said the attackers had links with IS and were part of a group led by Bahrum Naim, an Indonesian militant who is now in Syria.

“We have identified all attackers,” Charliyan said. “We can say that the attackers were affiliated with the ISIS group,” he added, using an acronym for the Islamic State group.

The claim was shared on Twitter late Thursday, and the U.S.-based SITE Intelligence Group said it also was circulated among pro-IS groups on other media.

The message said attackers carried out the Jakarta assault and had planted several bombs with timers. It differed from Indonesian police on the number of attackers, saying there were four. It said they wore suicide belts and carried light weaponry.

The statement could not be independently verified by The Associated Press, though it resembled previous claims made by the group, which controls territory in both Iraq and Syria.

Jakarta is no stranger to terrorism, with the 2009 bombings of two hotels that killed seven people and injured more than 50. The bloodiest attack by Islamic extremists in Indonesia — and in all of Asia — was in 2002, when a nightclub bombing on the resort island of Bali killed 202 people, mostly foreigners.

Those and others were blamed on the al-Qaida-inspired Jemaah Islamiyah. Following a crackdown by security forces, militant strikes in recent years have been smaller and less deadly, and have targeted government authorities, mainly police and anti-terrorism forces. Terrorism experts say IS supporters in Indonesia are drawn from the remnants of Jemaah Islamiyah.

Charliyan said police had received information in late November about a warning from the Islamic State group that “there will be a concert” in Indonesia, meaning an attack. Last month, anti-terror police arrested nine suspected militants and said they had planned attacks “to attract international news coverage of their existence here.”

Advisory to hotel guests in the lobby of the Mandarin Oriental after #JakartaBlasts. @CNBCi will have live coverage pic.twitter.com/u22bNQfvCK

Southeast Asian terrorism expert Sidney Jones wrote in November that Bahrum Naim has been urging his Indonesian audience to study the Paris attacks.

“While the police and army have been focused on going after Indonesia’s most wanted terrorist, Santoso, in the hills of Central Sulawesi, ISIS has succeeded in building a network of supporters in the suburbs of Jakarta,” Jones wrote.

Taufik Andri, a terrorist analyst, said although the attack ended swiftly and badly for the attackers, their aim was to show their presence and ability.

“Their main aim was just to give impression that ISIS’ supporters here are able to do what was done in Paris. It was just a Paris-inspired attack without being well prepared,” he told The Associated Press. Those attacks in November killed 130 people.

Thursday’s first suicide bomb went off about 10:50 a.m. at the Starbucks, which is near to some U.N. offices, a shopping center and other Western restaurants, including McDonald’s, Pizza Hut and Burger King. The neighborhood is home to many luxury hotels, high-rise buildings and diplomatic offices, including the French Embassy.

Karnavian told reporters that after customers ran out of the cafe, two gunmen outside opened fire, killing the Canadian and wounding an Indonesian.

At about the same time, two other suicide bombers struck a traffic police post nearby, killing an Indonesian man. Minutes later, a group of police were attacked by the remaining two gunmen, using homemade bombs, Karnavian said. This led to an exchange of fire that lasted 15 minutes and ended with both attackers dead.

Guruh Purwanto heard the initial explosion as he met with co-workers at an agricultural company next to the shopping center. He rushed out and saw white smoke billowing from the Starbucks and people running in panic.

“I was shocked when I saw two men with handguns shoot a foreigner,” Purwanto said. “He tried to hide behind a car.”

He heard another blast and saw three bodies on the street near a wrecked traffic police booth, with more white smoke.

The two gunmen ran into a movie theater but were eventually cornered by police in the Starbucks parking lot, Purwanto said.

“There was gunfire between police officers and the two attackers, like in a movie … and suddenly the two blew themselves up,” he said. “It was scary.”

When the police was hiding behind a car, people came and sell foods and drinks. We’re not affraid! #JakartaBlasts pic.twitter.com/c9Hcoxmrmu

A Dutch man who was seriously wounded underwent surgery, according to Foreign Ministry spokeswoman in the Netherlands.

The man, who was not identified, is an expert in forestry and ecosystems management for the U.N. Environment Program and is “fighting for his life,” said UNEP chief Achim Steiner.

About five hours after the first explosions, police announced the area was secure.

“This act is clearly aimed at disturbing public order and spreading terror among people,” said President Joko “Jokowi” Widodo, who visited the attack site. “The state, the nation and the people should not be afraid of, and be defeated by, such terror acts.”

In condemning the violence during a visit to London, U.S. Secretary of State John Kerry said “these acts of terror are not going to intimidate nation-states from protecting their citizens and continuing to provide real opportunity, education, jobs, possibilities of a future.”

The attack prompted a security lockdown in central Jakarta and enhanced checks all over the city.

By evening, a large screen atop the building that houses the Starbucks displayed messages that said “#prayforjakarta” and “Indonesia Unite.” Some people left flowers near the stricken traffic police post, along with a wreath that read “Deep condolences. We are not afraid.”