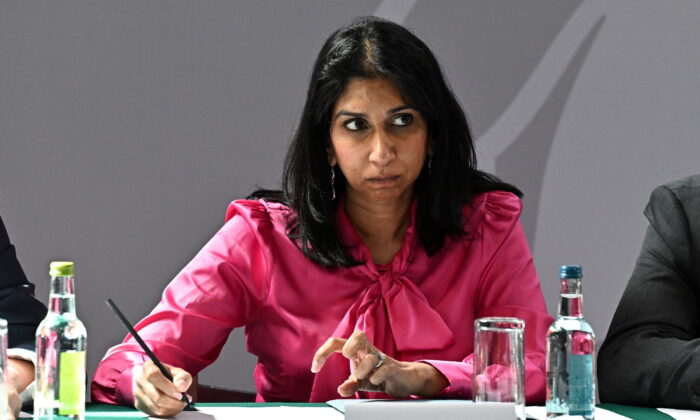 Attorney General Suella Braverman during a regional cabinet meeting at Middleport Pottery in Stoke on Trent, England, on May 12, 2022. (Oli Scarff/PA)
By Chris Summers

Chris Summers
Chris Summers is a UK-based journalist covering a wide range of national stories, with a particular interest in crime, policing and the law.
View profile
biggersmaller
Print

Home Secretary Suella Braverman has promised to do “whatever it takes” to stop the endless flow of illegal immigrants crossing the English Channel and landing in Kent, where they claim asylum or seek protection under modern slavery laws.

In a foreword to a report (pdf) by the Centre for Policy Studies think tank she said the numbers coming by small boats across the Channel were “wholly unacceptable and unsustainable.”

The report, which was co-authored by Theresa May’s former adviser Nick Timothy, says the government should introduce new laws which would forbid anyone who entered the country illegally from settling in the UK.

A summary of the report says all asylum seekers who enter Britain illegally should be detained in custody indefinitely, rather than being accommodated in hotels as they are at present.

It also called for, “changes to human rights laws to allow detention and offshoring—including, if necessary, Britain’s withdrawal from the European Convention on Human Rights.”

Braverman said she did not support everything in the report but she wrote: “The British public are fair-minded, tolerant, and generous in spirit. But we are fed up with the continued flouting of our laws and immigration rules to game our asylum system.”

She said: “We’ve had enough of the persistent abuse of human rights laws to thwart the removal of those with no right to be in the UK. This must end. Saying so is not xenophobic or anti-immigration.”

More than 43,000 people have crossed the English Channel on small boats this year—including around 15,000 from Albania—usually under the auspices of people traffickers who profit from the trade.

Braverman—whose own parents migrated to Britain from Kenya and Mauritius in the 1960s—has supported the policy of her predecessor, Priti Patel, who suggested “offshoring” illegal immigrants who crossed the Channel to Rwanda while their applications were being processed.

In June, the first planned flight of illegal immigrants from Britain to Rwanda was halted after a last-minute intervention by the European Court of Human Rights.

Braverman replaced Patel after Liz Truss succeeded Boris Johnson as prime minister in September and then resigned, only to return a few days later when Truss quit and was succeeded by Rishi Sunak.

Braverman Wants to ‘Deliver the Rwanda Partnership at Scale’

In her foreword she writes: “I know that to deliver the Rwanda partnership at scale, to disrupt the organised gangs who facilitate these illegal journeys, to remove the incentive for people to illegally cross the Channel, and to ensure we have an asylum framework that is fit for purpose, requires further work. The Prime Minister and I are committed to doing whatever it takes.”

Braverman added: “We are finalising our plan, and we will deliver the operational and legislative changes necessary to comprehensively tackle this problem.”

The report calls for “rapid offshoring to Rwanda” for illegal immigrants and says the Home Office should seek agreements with other countries to “supplement” the Rwanda deal.

In the report, Timothy said: “If we are to stop the crossings, we will need to take immediate and bold action. It is not something that can be fixed through gradual, incremental change.”

But Sunak may not feel he can push through such a radical overhaul to the immigration system before a general election, which is due in the next two years.

Kit Malthouse, a former minister under Boris Johnson, told the BBC on Sunday: “I worry slightly that the kind of rhetoric of ‘let’s be tough, let’s just get tougher and tougher’ is just not getting us anywhere and that actually I’d much rather hear smart solutions than tough ones.”

The think tank says the Modern Slavery Act, which was introduced by David Cameron’s government in 2015, needs to be “reformed” to stop its “widespread abuse.”

Immigration minister Robert Jenrick said on the weekend the government was considering barring people from “safe countries” such as Albania.

Jenrick told GB News: “Albania is a demonstrably safe country. It is very hard to see how an Albanian should be able to successfully claim asylum here in the UK. We have a returns agreement, which was signed a year ago, and a thousand Albanians have gone back already. We are looking at what we can do there.”

In October, Dan O’Mahoney, the Home Office’s clandestine threat commander, said many Albanian illegal immigrants were “gaming the system” by using the National Referral Mechanism, which is part of the Modern Slavery Act.

O’Mahoney said they “will typically put them in a hotel for a couple of days, and then they’ll disappear, work illegally in the UK for maybe six months, maybe a year, send the money home, and then they’ll go back to Albania.”

Chris Summers
Chris Summers is a UK-based journalist covering a wide range of national stories, with a particular interest in crime, policing and the law.