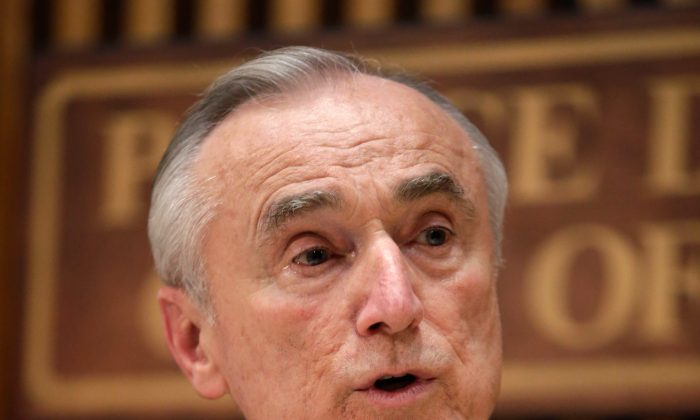 NEW YORK—Commissioner Bill Bratton said he will join the effort to pressure Apple Inc and other mobile device makers to install a kill switch for stolen devices. Bratton said 68 percent of crime in Manhattan is from grand larceny or theft. A significant portion of stolen devices are Apple products.

Commissioner Bratton spoke at a symposium on community policing at the Ford Foundation on Wednesday, Jan 15.

Device makers could easily install such a kill switch, and Samsung has proposed making a kill switch standard on its phones. American device manufacturers have not supported the idea.

“They don’t want to do it because they are basically working in cahoots with the insurance companies and they’re making a fortune off it,” said Bratton.

But some wireless providers objected to installing such software in smartphones because devices would be vulnerable to being hacked and turned off remotely.

Bratton said he will join New York Attorney General Eric Schneiderman and San Francicso District Attorney George Gascón in pressuring Apple on the issue. The two are part of a coalition of public officials that have formed the Secure Our Smartphones Initiative to pressure manufacturers to install a kill switch in devices.

“We are responding to a problem they can prevent. They have the capability to effectively make these phones useless.”

The surge in thefts of mobile devices “raises crime rates, it raises fear, it raises the cost for poor people and rich people alike,” said Bratton.

While violent homicides have continued to drop in recent years, thefts are on the rise. Citywide, grand larceny or theft accounts for 40 percent of crime.