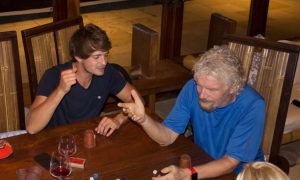 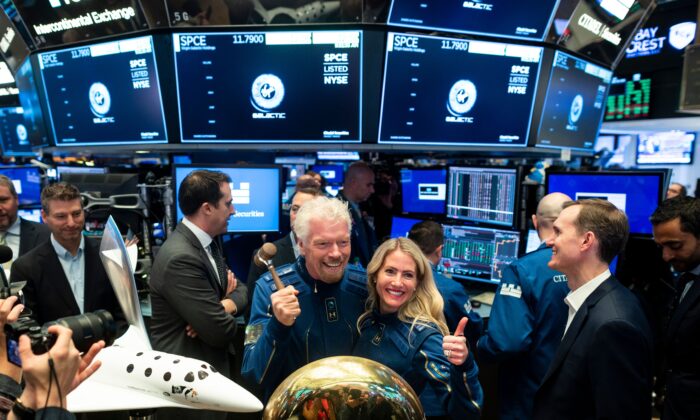 Branson Ready for His Biggest Test Yet as Space Shot Beckons

Richard Branson plucks a dried grasshopper from a jar, takes a bite, and pronounces the insect surprisingly tasty before slurping down a vegan yogurt and offering to trial the concoction on Virgin Atlantic Airways flights.

The UK billionaire, a serial creator of companies spanning record labels to airlines to fizzy drinks and bridal gowns, is in his element. He’s meeting with fellow entrepreneurs at a so-called “Pitch to Rich” session in Israel, where the contest’s winner gets a business-class flight to London for a week of hot-housing at Virgin’s own innovation hub.

The event in Tel Aviv speaks to the appetite for fresh ideas that still drives Britain’s best-known businessman in his seventieth year. Branson’s own contribution to human endeavor is about to enter a critical phase as Virgin Galactic, the prime focus of his attention for 15 years, prepares to launch the first tourists into space next year.

Traveling straight from Israel to the United States, Branson rang the opening bell in the New York Stock Exchange on Oct. 28 as Virgin Galactic became the first space-launch company to go public.

On a trip marking Virgin Atlantic’s arrival in the Israeli market, the Englishman said he’s trying to quell his mounting anticipation about the upcoming space voyage given previous delays, including a hiatus following a fatal crash in 2014. Branson has pledged to personally be aboard the first public space shot.

“Virgin Galactic has been a difficult baby and it’s gone through some tough teenage years, but we’re now close to creating something very special,” he said. “There need to be more test flights this year and I’m trying not to get too carried away until a few months before the launch, but I’m very excited.”

The spaceflight is just one of a series of planned milestones in a 12 month period that’s set to define the Virgin Group’s future. With his iconoclast approach intact even after five decades in the business of disruption, Branson also has big plans for his airline, a satellite launcher and a cruise-ship business he plans to introduce next year, among other projects.

Boeing Co.’s future-technologies arm has pledged $20 million for a minority stake in Virgin Galactic, a business finding itself in increasingly hot competition for billionaire-funded space travel. Amazon.com Inc. founder Jeff Bezos’ Blue Origin company plans to take payloads and tourists to the edge of space on an 11-minute flight, while Tesla Inc. CEO Elon Musk’s SpaceX has also joined the race with a pledge in to send passengers to the moon, Mars and beyond.

Rather than an IPO, Virgin Galactic is listing through a merger with a publicly-traded investment vehicle, Social Capital Hedosophia. Its shares rose 11% Friday after the combination was completed. The new entity will be known as Virgin Galactic Holdings Inc. and trade under the ticker SPCE.

Galactic is interested in developing hypersonic airline flights that would slash global travel times. While the dream of linking London with Australia in just a few hours remains distant, its technology could be more readily adapted to link far-flung U.S. cities, Branson predicts.

Branson speaks in glowing terms of 35-year-old Virgin Atlantic, the airline that took the brand from a quirky UK record label known for signing the Sex Pistols to a globally recognized force.

Among Branson’s travel frontiers is India, where he will seek to crack the burgeoning travel market with a service to Mumbai that kicks off this month. A route to Sao Paulo will follow next year as the carrier steps up competition with arch-rival British Airways, emboldened by a partnership with Delta Air Lines Inc.

In Delta, Virgin Atlantic now has an ally with shoulders broad enough to take on British Airways after years of often bitter competition—and courtroom clashes—with the larger carrier. That push could gain traction with an increase in flights following the opening next decade of a new runway at London’s Heathrow airport. Branson says he’s been buoyed by the hub’s positive reaction to his calls for a shakeup to the slot-allocation systems to allow his airline to become a second UK flag carrier.

He admits to a sadness surrounding the imminent reduction of his majority stake in Virgin Atlantic to a 20% holding, saying he’s taking the step reluctantly to safeguard the carrier’s future in an industry increasingly dominated by a handful of airline groups linked by cross-shareholdings and cost and revenue sharing

“It’s not a deal that I particularly like doing because from talking to the staff they’d quite like the airline to remain slightly more personal,” he says. “But I’ve promised them I’m going to remain very involved.”

Next year will also see the launch of the new Virgin Voyages cruise line, with the first ship commencing sea trials in the Mediterranean before being based in Miami, with three more to follow. Branson is pitching the business at people who would normally hate such a holiday—“like me,” he says—and has asked managers to submit their own list of bugbears, headed by his own dislike of buffet dining, which he plans to eliminate.

Also in the pipeline are Virgin Orbit’s first full “drop and fire” launch from the wing of a modified Boeing 747 in January as the satellite-deployment startup heads toward its commercial debut.

Then there’s the opening of Virgin Hotels in four U.S. cities that will more than double the size of a business founded as a bet on real estate after the 2008 crash, followed by the construction of Virgin Hyperloop One’s link between Mumbai and Pune, marking the world debut of technology that shoots passenger pods through a tube at near-supersonic speeds.

Back in Tel Aviv, Branson regales his audience of Israeli startups with tales of how he became a one-man promotional campaign for the Virgin brand. They’re familiar stories for many—death-defying stunts in hot-air balloons and yachts, getting arrested at Heathrow after painting a Virgin logo on the tail of a BA Concorde, crushing Coca-Cola cans in a Sherman tank in Times Square to promote Virgin Cola—but told with a renewed energy.

One thing seems certain: the man with the broad smile and surfer-dude wavy mane isn’t about to step back from the fray.

“I enjoy every minute of my life and the variety of what we do,” he says. “True, I sometimes glance in the mirror and wonder who the hell that is looking back. But I don’t feel any older and I want carry on and use the experience that I have.”