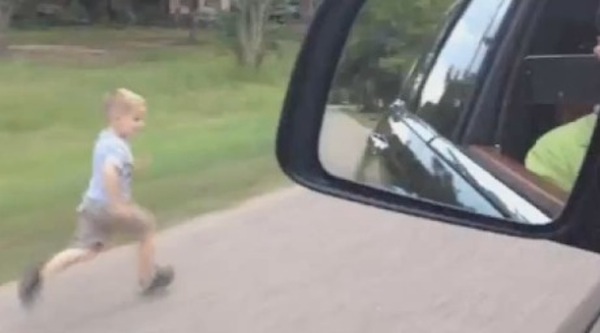 Brandon Yates, father of Clay Yates, is defending his actions in a now viral video that shows him driving beside his son and urging him to run faster.

Near the end, he gets close to Clay as Clay finishes the run up to the Yates home.

But Yates says that the video was taken out of context. It started as a punishment for Clay repeatedly unbuckling his seat belt, Yates told KHOU, and the road was a private road that’s owned by Yates’ parents.

Yates said that he wasn’t expecting some of the backlash that happened after the video was posted.

It was just a playful moment between a father and a son who just got back from watching the Cowboys get beat again and him wanting to have aspirations to play football,” he said.

Clay’s mother agrees, adding that Clay as an only child is actually rather spoiled.

“Clay is not in any danger, he’s not hurting; we don’t abuse him or anything like that,” Samantha Yates said.