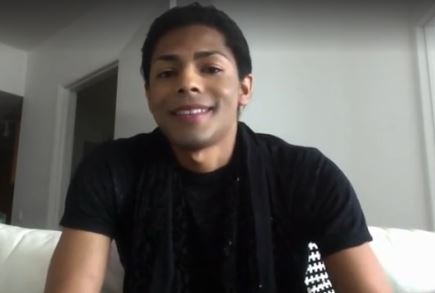 Brandon Howard, the son of Miki Howard, who may also be the son of one of the Jackson family. (Vimeo)
Entertainment

The results have been heavily disputed, including from those managing Jackson’s estate.

Howard, 31, is the son of Miki Howard, a 53-year-old singer whom Jackson’s father Joe Jackson represented in the 1980s.

Brandon was born soon after Miki met Joe in 1982.

Brandon emphasizes that despite the test results he doesn’t want any of Michael Jackson’s large estate.

“I’ve never self-proclaimed to be Michael Jackson’s son,” he said in a video clip.

“I’m definitely not suing the estate, I’ve been taken care of very well and also I make my own cash, OK? I did a DNA test but it had nothing to do with any of this, I swear on my life. I’m done.

“We’ve never even heard from him,” Weitzman said.

“Any deadline for claiming to be Michael’s child has long since passed.”

Brandon himself said that he didn’t want his DNA tested this way.

“To my fans, family, and friends, despite recent allegations, I did not authorize the testing of my DNA to be compared to that of the late Michael Jackson,” he said in a statement.

“This spring, I agreed to be a part of a documentary with FilmOn.TV and was asked to give a sample of my DNA. Even though I agreed to this I never expected it to be used in this manner.”

The owner of FilmOn.TV claims that he got Michael Jackson’s DNA from a dental impression of the late singer, even though the impression is 30 years old.

The allegations were dismissed by singer Augie Johnson, who says that he is the real father of Brandon.

There’s other possibilities. A source told the NY Daily News that the DNA results were correct, but for the wrong Jackson–Joe Jackson is actually the boy’s father, the source said.