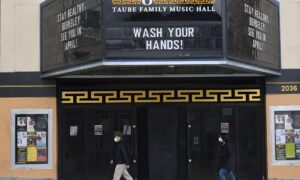 CCP Virus Should End the Smart Growth Urbanization of America
0 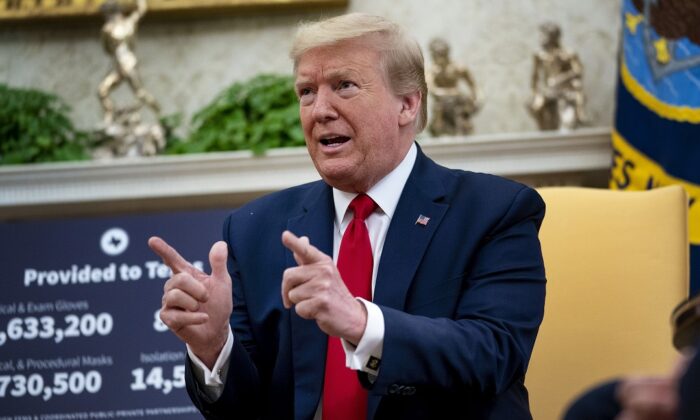 President Donald Trump speaks to reporters while hosting Texas Governor Greg Abbott about what his state has done to restart business during the novel coronavirus pandemic in the Oval Office at the White House in Washington on May 7, 2020. (Doug Mills/Getty Images)
Viewpoints

Branding: Democrats Are the Shutdown Party, Trump the Champion of Working People

In politics, how you brand yourself determines your fate. In the face of a national crisis, with people growing increasingly restless and angry, incredibly, the Democrats have branded themselves the party of the shutdown.

President Donald Trump, fighting to reopen the economy, has become firmly the president of working people.

In the market place, branding is everything. Apple, Coca-Cola, McDonald’s, and Disney trade off their brand, not just their products. In the marketplace of ideas—politics—brands are everything as well.

For decades, coming out of the late 1800s and into the Great Depression, Democrats were able to brand themselves the party of the working man. Meanwhile, the term “Country Club Republicans” saddled Republicans. That branding benefited the Democrats for decades and helped them hold onto the House of Representatives for 38 straight years.

The Democrats still claim they are for the working man, but their big government politics for the last several decades belie that and are changing their brand—perhaps irrevocably.

Recall that House Speaker Nancy Pelosi (D-Calif.) claimed that welfare payments were proof that government is working. Former President Barack Obama famously declared that you can create a working majority of people dependent on government. He then spent eight years building that coalition of dependency. Today, the largest block of the Democrat party, the Sanders–Warren block, firmly believes in socialist or semi-socialist policies.

The problem for Democrats is that Americans, on balance, are not that far left. Americans grew tired of the weak economy that government created from 2008 to 2016 and the resultant lack of jobs.

He immediately eschewed some of the Republican dogma and pushed a trade agenda that included tariffs. In doing that, Trump appealed to workers in the Rust Belt, states such as Pennsylvania, Ohio, Wisconsin, and Michigan, like no Republican since Ronald Reagan in 1984. Trump won those states, and that so-called “inside straight” elected Trump president.

Since his election, Trump pushed through policies such as tax reform and deregulation that lit up the economy. Although the Democrats shouted that he was helping the rich, the jobs went to the lower and middle class like few times in the last 100 years.

As a result of fostering so many jobs for so many, Trump’s stature among the working class jumped. It included historically high ratings among blacks and Latinos—each in the mid-30s. Trump clearly was favored by working men and women far more than any of his Republican predecessors except for Reagan.

Then COVID-19 came along.

Given the disease’s unprecedented nature, the parties struggled with initial policy choices. Trump pushed restrictions before the Democrats, and he ultimately embraced a partial shutdown of the economy. Today, however, all has changed. The frustration across the United States with the shutdown is palpable and is measured by a growing number of protests and businesses opening in defiance of government orders.

Nevertheless, in their unrelenting desire to oppose all things Trump, the Democrats have more than embraced the shutdown as a matter of dogma. A review of their talking points and social media makes it plain to see that the Democrats (a) have now branded themselves the Party of the Shutdown and (b) are claiming the Republicans are heartless for wanting to open the economy and risk lives.

Americans, however, have seen the numbers. They understand the risks to a significant degree. They also know that COVID-19 isn’t the only issue. COVID-19 was added to the list of medical problems facing America; it didn’t replace them.

In other words, in my view, the majority of Americans no longer favor shutdown policies as demanded by the Democrats, from Pelosi in Washington to Gov. Gavin Newsom in California, to Gov. Gretchen Whitmer in Michigan and Mayor Bill de Blasio in New York.

Americans want solutions and the right to earn a living. They now want to shut down “shutdown politics,” and they have a clear champion.

Trump is unequivocally the leader of the “open the economy” cause. Don’t forget that he pushed aid while Democrats held it up. Overall, the president has clearly branded himself as the advocate for the worker, the small business person, and employers everywhere.

Overall, the Democrats’ shutdown politics are perceived as negative while Trump’s cause is hopeful. That is behind Trump’s recent rise in the polls and why he is viewed as better than Biden on jobs and how to handle COVID-19.

Finally, when it comes to deciding for whom to vote in November, hopeful beats the negative. Championing jobs beats shutdown politics. That’s just political branding 101.