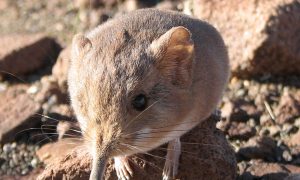 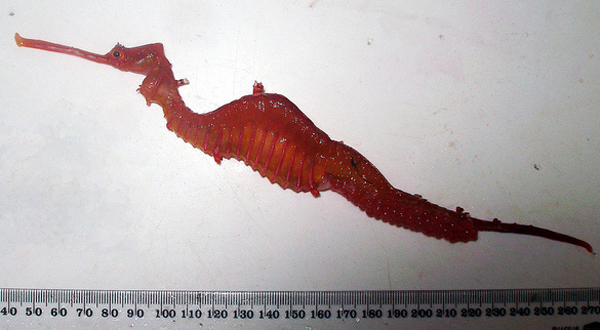 The male ruby seadragon (Phyllopteryx dewysea) that was collected in 2007. Photo by: Western Australian Museum.
Environment

For 150 years, scientists have known of just two so-called seadragons: the leafy seadragon (Phycodurus eques) and the weedy seadragon (Phyllopteryx taeniolatus). But a new paper in the Royal Society Open Science has announced the discovery of a third, dubbed the ruby seadragon (Phyllopteryx dewysea) for its incredible bright-red coloring. Found only off the southern Australian coastline, seadragons belong to the same family as the more familiar seahorses: the Syngnathidae.

“Seadragons are fish of mesmerizing beauty…Their ornamentation helps camouflage them among seagrasses and kelp in the shallow coastal waters of southern Australia,” the researchers write in the paper.

The new species was first noticed after a male was caught during a biodiversity trawling survey using in 2007. At first, scientists thought it was the weedy seadragon, also known as the common seadragon. But DNA results showed differently. After researchers realized they had something new on their hands, they scoured museum collections to see if anyone else had collected the new species. They found three more specimens lying in drawers.

In addition to DNA research, the team also took a CT scan (computer tomography) of one of the specimens.

“[The] scan gave us 5,000 X-ray slices that we were able to assemble into a rotating 3-D model of the new seadragon,” said lead author Josefin Stiller. “We could then see several features of the skeleton that were distinct from the other two species, corroborating the genetic evidence.”

A Scripps graduate student, Stiller was the first one to find the male specimen, which was carrying offspring. Like seahorses, seadragon males carry the eggs.

The scientists believe the new species avoided notice for so long because it is found in deeper waters off the coast—maybe even beyond recreational scuba diving. The deeper water habitat may also explain its darker, red color.

“Although the red color is conspicuous when out of the water, red light is rapidly absorbed with depth and so being red may effectively render the seadragon cryptic,” the researchers write.

The red color would also have faded shortly after removing it from the ocean making it more difficult to notice as something wholly different.
Given how little is known about the new species, the researchers write that more research is needed before conservationists decide if it is endangered.

“The few records from southwestern Australia that we currently have of the new seadragon cannot give a satisfactory picture of the distributional range,” the researchers write. “Furthermore, the records off the coast of Perth are almost 60 years old and it is unclear if Phyllopteryx dewyse still occur in this region. The urban development surrounding the Perth region has been significant in the last century, including changes in water quality and vegetation that may have also affected the offshore habitat.”

The other two species of seadragon are listed as Near Threatened. They are imperiled by habitat destruction, degradation, and accidental bycatch from fisheries. There is also some concern over collecting the species for trade.

Although dubbed the ruby seadragon, the new species is actually named after Mary “Dewy” White, the cofounder of the Lowe Family Foundation, which supported the research.

“I’ve always been fascinated with marine life, especially seadragons, so this is an amazing discovery,” said White. “People always talk about going to outer space but they forget about the ocean we have here on our own planet. For me ocean conservation and research is paramount, and we need to do what we can to encourage and nurture ocean exploration.”

This article was written by Jeremy Hance, a contributing writer for news.mongabay.com. This article is republished with permission, original article here.