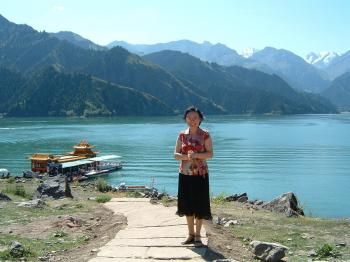 Ms. Ma Jinhua was arrested a few days before her visit to the U.S. and was forced to undergo brainwashing in an attempt to get her to renounce Falun Gong. (Joanna Wang)
US

Ms. Joanna Wang, became a U.S. citizen through naturalization, and has been enjoying her new life in San Diego. She desperately wants to share her treasured freedoms here in the U.S. with her mother, Ms. Ma Jinhua, who is a Falun Gong practitioner.

In fact, the mother and daughter have been planning a reunion in San Diego for the past few months. Ms. Wang’s mother already had a visa to visit the U.S. and has purchased plane tickets to travel to the U.S. on Sept. 8, and Ms. Wang has been seriously considering moving to a new apartment to accommodate her mother’s stay, until the authorities in Hefei City took her mother away.

On the afternoon of Sept. 4, four days before her mother’s scheduled visit to the U.S., Ms. Wang’s mother had just received her plane tickets when seven officers from the Hefei Security Bureau made a surprised visit to her mother’s home. The officers ransacked her mother’s room, taking away her passport, Falun Gong books and tapes.

Ms. Wang’s family in China was kept in the dark about what happened to her mother for the first six days after her arrest. The authorities refused to tell them why she was taken into custody, where she was detained, or how she was treated by the authorities.

Six days later, the authorities paid another surprise visit to Ms. Wang’s brother at his office and also took him into custody. Mr. Wang was kept in detention for 20 hours, during which time the authorities interrogated him about how her mother’s involvement in the practice of Falun Gong. Mr. Wang told her sister over the phone that it was the most horrifying experience of his life, and that he couldn’t imagine how his mother has to go through when she is being kept under tight watch day and night.

“The whole process, including ransacking my mother’s room, keeping her in secret detention and depriving her of freedom, forcing her to take brainwashing classes and to sign a guarantee statement to renounce Falun Gong—is all illegal,” said Ms. Wang.

“I have not seen my mother for three years and I miss her so much. We are furious and we are worried sick about her safety. She is a retiree in her late fifties, what kind of danger can she pose to China? The authorities in China cannot tell what is right from wrong at all.”

“My mother has been enjoining a good health since she started practicing Falun Gong. She has been following Falun Gong’s teaching, the principle of Truthfulness-Compassion-Forbearance, and has therefore become a positive and upbeat person. Not only is she a good mother and a good wife, she is also my best friend.”

Until recently, Ms. Wang has never come close to facing something as outrageous as her mother’s treatment by the Chinese communist regime. However, she is now personally living through the nightmares hundreds of thousands of Falun Gong practitioners have been experiencing in China.

Ms. Wang is calling for support from the international community to rescue her mother from the hands of the Chinese communist regime. She is currently seeking help from the U.S. government officials.

A local congressman, Duncan Hunter, wrote the Secretary of State Condoleezza Rice on Sept. 17 asking for her help in securing Jinhua Ma's release.

Note:  Falun Gong, also known as Falun Dafa, is a cultivation practice that not only practices gentle movements and meditation, but also cultivates the mind by following the principle of Truthfulness-Compassion-Forbearance. The Chinese communist regime banned the practice of Falun Gong in 1999 due to its enormous popularity, and has since persecuted Falun Gong practitioners. Evidence confirms that Falun Gong practitioners in China have been abused, beaten, tortured, and murdered for refusing to renounce their practices.