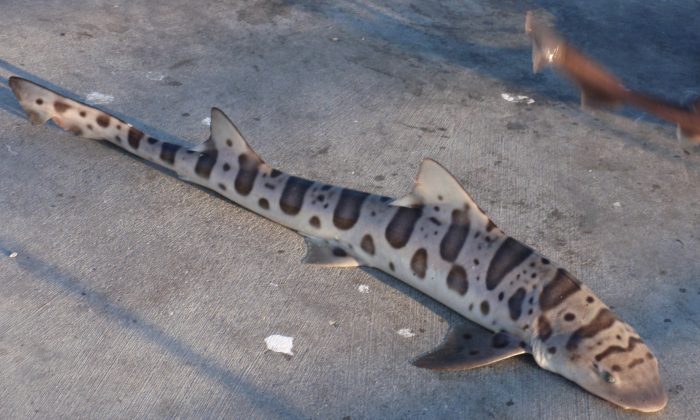 Leopard shark washed up on beach in San Francisco. (Tom Hilton [CC BY 2.0 (http://creativecommons.org/licenses/by/2.0)], via Wikimedia Commons)
US

Leopard sharks in the hundreds have been washing up on beaches in the San Francisco Bay area since March this year, along with various species of other sharks and rays. The mass die-off has been prompting serious concern from fish pathologists, but Mark Okihiro, senior fish pathologist with the California Department of Fish and Wildlife, believes he has finally identified the cause.

Okihiro is leading the state investigation into the unexpected deaths. He estimates more than 1,000 leopard sharks, 200-500 bat rays, hundreds of striped bass, almost 50 smoothhound sharks, and a few thornback rays, guitarfish, and halibut have died in the bay this year, according to Bay Nature.

From several biopsies of sharks and fish that have been washed up on the beaches, Okihiro discovered “inflammation, bleeding, and lesions in the brain” from being eaten by a nasty little parasite, reported Sport Diver. Okihiro also observed hemorrhaging from the skin near vents and internal organs in some of the sharks.

With the help of a geneticist, Okihiro has identified the parasite as the brain-eating protozoan Miamiensis avidus. The protozoan appears as dark, hairy blotches under the microscope. It is a well-known parasite as it has been responsible for the rapid death of sharks in aquariums that have become infected, according to Sport Diver.

The protozoan moves through the nasal and ear canals into the brain and eats away at brain tissue, “the aggressive and destructive Protozoa are entering the sharks skull via olfactory lamellae and naris, before penetrating and destroying vital parts of the brain. Other equally terminal infections gain access via the shark or rays endolymphatic ducts and ear canals,” Okihiro told Bay Nature. The naris is a nasal passage in a shark. And the olfactory lamellae are gill for sensing smell.

This damage to the brain tissue results in a disoriented animal that eventually dies or becomes stranded.

Okihiro started investigating shark and ray die-offs occurring in the area 11 years ago in 2006, and then again in 2011 when another die-off occurred. He had initially dismissed the protozoan as the main culprit as the hairy, round blotches weren’t easy to find in the animals brains. He also knew the Protozoa as a common parasite that he had seen in a variety of species, which made him consider other sources of infection such as viral or bacterial pathogens, and fungi.

But the hundreds of animal deaths reported and examined this year provided scientists with the “avalanche of data” they needed to gain confidence in the deadly impact of the parasite.

Now, Okihiro believes that the parasite is likely to be carried by a species that already inhabits the bay—perhaps a rockfish or perch species, he told Bay Nature. One theory for the parasite’s increased virulence during die-off events are the conditions created in the bay during the heavy rainfall experienced in 2006, 2011, and this year. Researchers say lower salinity or pollution from the rain may have provided conditions in the bay that weakened the immunity of the sharks and fish.

The consistent appearance of the parasite in this year’s aquatic victims have made Okihiro “90-100 percent confident” that the protozoan is the mass fish and shark killer.

Leopard sharks have traditionally been the most abundant shark species in San Francisco Bay, and have not been considered endangered. But “if they keep losing these numbers every spring when they are trying to pup, that’s asking for disaster,” Sean Van Sommeran, executive director and founder of the Pelagic Shark Research Foundation, told SF Gate. “They can’t sustain these losses.”