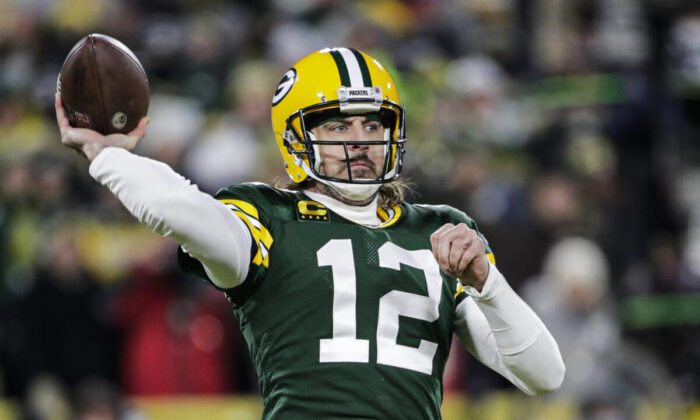 Green Bay Packers' Aaron Rodgers throws during the first half of an NFL football game against the Minnesota Vikings in Green Bay, Wis., on Jan. 2, 2022, (Aaron Gash/AP Photo)
NFL

Brady broke more records and had one of his best seasons at age 44 while helping the defending Super Bowl champion Tampa Bay Buccaneers win their first division title in 14 years.

Rodgers played like an MVP and led the Green Bay Packers to the No. 1 seed in the NFC for the second straight season.

Mahomes and the Kansas City Chiefs bounced back from a rough start to win their sixth straight AFC West title.

The league’s biggest season had plenty of twists thanks to COVID-19 and evolving protocols but each of the 272 games should be played by the time the Los Angeles Chargers and Las Vegas Raiders wrap up the regular season Sunday night in a matchup that will likely determine the 14th playoff berth.

And, the NFL did it with fans filling stadiums this year.

There were some bumps along the way and more doubts emerged when a surge in coronavirus cases because of the omicron variant caused three games to be rescheduled in Week 15. However, the league in cooperation with the NFL Players Association managed to pull it off, although several teams had to play important games without key players because of COVID-19.

Navigating through the postseason will be challenging. The league is looking at contingency plans in the unlikely event the Super Bowl can’t be played at So-Fi Stadium in Inglewood, California, on Feb. 13. But plans are currently on schedule and the possibility still exists that it’ll be an all-LA Super Bowl as the Rams hold the NFC’s No. 2 seed and the Chargers sit in the AFC’s No. 7 spot going into the final weekend.

Vaccines were the big topic entering the season and nearly 95 percent of players got the shot by the end of the year. Still, the number of positive tests skyrocketed late in the season. The league and the players’ union reduced return-to-play guidelines, allowing players to come back after five days.

Eleven teams already wrapped up playoff spots and seven more still have a shot to get in with one game remaining. Both conferences were wide open throughout most of the season and several teams have a solid chance to reach the Big Game.

The NFL’s worst division in 2020 is sending two teams to the dance. Dak Prescott returned from a devastating ankle injury to lead the Dallas Cowboys to the NFC East title and rookie coach Nick Sirianni along with second-year QB Jalen Hurts guided the Philadelphia Eagles to a wild-card spot after a last-place finish cost Super Bowl-winning coach Doug Pederson his job.

The New Orleans Saints found life without Drew Brees difficult, as expected. They used three starting quarterbacks after Jameis Winston suffered a season-ending knee injury. Despite sweeping the Buccaneers for the second straight season, the Saints were inconsistent but still can grab a playoff berth with a win and some help.

No team came close to challenging Rodgers and the Packers in the NFC North and the Vikings and Bears may be searching for a new coach by Monday.

Russell Wilson finally missed a game for the first time in his career and then returned faster than anticipated from a severe finger injury only to struggle as the Seahawks suffered their first losing season in his 10 seasons in Seattle.

The Rams and Arizona Cardinals punched their tickets to the postseason and are battling for the NFC West crown. Matthew Stafford’s first season in Sean McVay’s offense has been a success and the Rams brought in Odell Beckham Jr. midway through the season to bolster the passing game as Cooper Kupp entered the last game with a chance to break the single-season record for most catches and yards receiving.

Jimmy Garoppolo held off rookie Trey Lance for the starting job in San Francisco and the 49ers could give the West three playoff teams.

In the AFC, Bill Belichick turned to rookie quarterback Mac Jones to lead the New England Patriots back to a familiar postseason appearance after a one-year hiatus following Brady’s departure.

Josh Allen and the Buffalo Bills struggled to live up to preseason hype after reaching the AFC championship game, but hit their rhythm in the second half and should secure a second straight division title.

The Miami Dolphins became the first team in NFL history to lose seven straight games and then win seven in a row. The Jets, like their New York counterparts the Giants, were equally inept at 4-12 each.

The AFC North has a new sheriff in town as Joe Burrow came back from a knee injury to lead the Cincinnati Bengals from worst to first. The Baltimore Ravens fought a slew of injuries before a five-game losing streak derailed their season.

Ben Roethlisberger’s remarkable career in Pittsburgh is coming to an end as the Steelers need a ton of help to get a playoff spot. After ending a long playoff drought last year, the Cleveland Browns were back to being the Browns.

The Tennessee Titans are one win away from earning the AFC’s No. 1 seed, a major accomplishment considering they lost Derrick Henry to a foot injury for much of the season.

Carson Wentz reunited with Frank Reich in Indianapolis and handed off to Jonathan Taylor, whose spectacular season has the Colts a win away from a playoff spot.

Urban Meyer didn’t last one season in Jacksonville while Deshaun Watson got paid to sit out the season in Houston.

Jon Gruden lost his job in Las Vegas because of old emails and the Raiders cut star receiver Henry Ruggs III following a fatal drunken driving crash. Still, Derek Carr has them in position to make the playoffs for the second time in 19 seasons.

Among the NFL’s brightest defensive stars are a pair of Cowboys. Trevon Diggs leads the league with 11 interceptions and rookie Micah Parsons has 13 sacks.

No. 1 overall pick Trevor Lawrence had a poor rookie year with the Jaguars, who should get the top pick again.

So while COVID-19 made for another unusual season in the NFL, watching Brady, Rodgers and Mahomes continue their success, seeing Antonio Brown create more drama and the Jaguars, Jets, Giants and Lions fail again made it seem more typical.