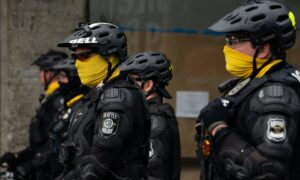 Bradley William Stone has been identified as the suspected shooter in Montgomery County, PA.

Stone, 35, of Pennsburg, has killed six people so far, and is on the run. Another victim has been left seriously wounded.

The district attorney’s office said all of the victims are family members of Stone.

“Stone should be considered armed and dangerous,” the office said in a press statement. “Anyone with information about Stone’s whereabouts is asked to call 911 immediately. Do not approach him.”

Stone broke in through a glass door around 4 a.m., firing multiple rounds and fleeing with their two children, the woman’s neighbors said.

He then went to two nearby communities, where her relatives lived, killed five other people and severely wounded another person before apparently holing up in a Pennsburg home, authorities said.

“She would tell anybody who would listen that he was going to kill her, and that she was really afraid for her life,” said Evan Weron, a neighbor of Stone’s ex-wife, Nicole Stone.

Police are now conducting an extensive search for Stone in and around Pennsburg.

People should if possible remain indoors with doors and windows locked.

The shootings occurred at homes in Harleysville, Lansdale and Souderton, which are within a few miles of each other. Police with armored vehicles and rifles moved to Pennsburg after spending several hours outside the home in Souderton where several victims were found.

Montgomery County District Attorney Risa Vetri Ferman says Stone, about 5-foot-10 and 195 pounds, was likely wearing military fatigues and was known to use a cane or walker