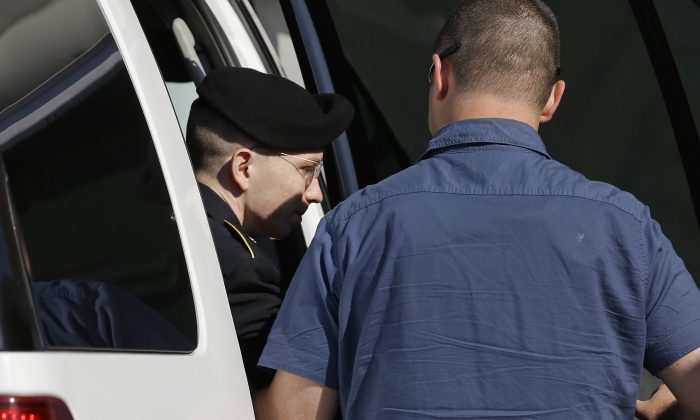 Army Pfc. Bradley Manning steps out of a security vehicle as he is escorted into a courthouse in Fort Meade, Md., Tuesday, July 30, 2013, before a hearing in his court martial. The military judge hearing Manning's trial is expected to announce her decision Tuesday afternoon. He was acquitted of aiding the enemy but found guilty of 21 other offenses. (AP Photo/Patrick Semansky)
US

Bradley Manning was acquitted of aiding the enemy after leaking over 700,000 classified military documents to Wikileaks. The charge was the most serious of 21 counts. It carried a possible life sentence without parole.

The judge, Army Col. Denise Lind, deliberated for about 16 hours over three days before reaching her decision in a case that drew worldwide attention as supporters hailed Manning as a whistleblower. The U.S. government called him an anarchist computer hacker and attention-seeking traitor.

Manning stood and faced the judge as she read the decision. She didn’t explain her verdict, but said she would release detailed written findings. She didn’t say when she would do that.

Manning was, however, convicted of five espionage counts, five theft charges, a computer fraud charge and other military infractions.

Among the more specific counts, he was found guilty of wantonly causing intelligence to be published on the Internet, and guilty of an espionage act violation for leaking the Collateral Murder video.

Manning was found guilty of 20 counts total. He faces a maximum sentencing of 136 years in jail.

Manning pleaded guilty earlier this year to lesser offenses that could have brought him 20 years behind bars, yet the government continued to pursue the original, more serious charges.

Manning was a private in the Army working in information technology when he accessed classified U.S. files and leaked them to Wikileaks, which subsequently published them online and through several media outlets.

Sentencing for Manning will be at 9:30 a.m. on July 31, according to Bret Baier.

The State Department had no comment on the ruling, referring journalist Hannah Allam to the Department of Defense, which hasn’t issued a statement as of yet.

Article continues after the discussion. Please vote and comment

In closing arguments last week the prosecution and defense teams had focused on Manning’s character.

The prosecution refuted the defense’s line that Manning was a whistlebower, painting the young private as an attention seeker with “evil intent.” According to prosecutors, he knowingly leaking information to Wikileaks so that it that would get into enemy hands.

“He was a traitor, a traitor who understood the value of compromised information in the hands of the enemy and took deliberate steps to ensure that they, along with the world, received it,” said Army prosecutor Maj. Ashden Fein.

“That is a whistleblower, period. That is somebody who wants to inform the American public.”