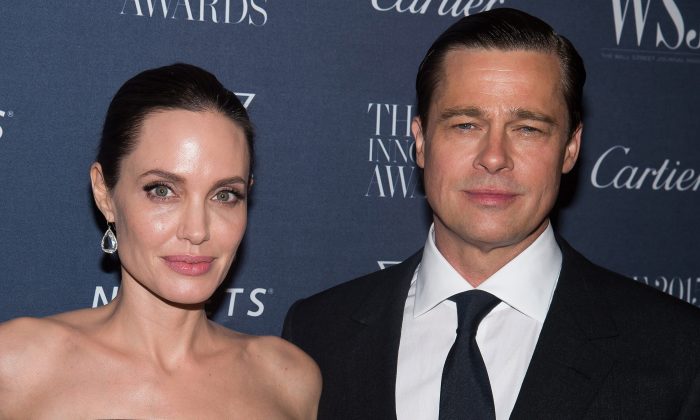 In this Nov. 4, 2015 file photo Angelina Jolie Pitt and Brad Pitt attend the WSJ Magazine Innovator Awards 2015 at The Museum of Modern Art in New York. Jolie and Pitt announced they are divorcing on Sept. 20. Pitt is reportedly under investigation for child abuse. (Photo by Charles Sykes/Invision/AP, File)
Entertainment

Brad Pitt has broken his silence about his divorce from Angelina Jolie.

“I am very saddened by this, but what matters most now is the well-being of our kids,” he said in the statement to People magazine. “I kindly ask the press to give them the space they deserve during this challenging time.”

The couple are the parents to three biological children—Shiloh, and twins Vivienne and Knox—and three adopted children: Maddox, Pax, and Zahara.

Jolie filed for divorce from the “World War Z” actor on Sept. 19, citing irreconcilable differences. According to court documents, she has petitioned the court for physical custody of the couple’s six children and visitation rights for Pitt.

“This decision was made for the health of the family. She will not be commenting at this time and asks that the family be given their privacy during this difficult time,” The Jolie Pitts’ attorney, Robert Offer, said in a statement to People magazine.

Pitt and Jolie met on the set of “Mr. and Mrs. Smith” in 2005. Pitt dissolved his then-marriage to Jennifer Aniston and began dating Jolie for nearly a decade before they married in a private ceremony in Château Miraval, France on Aug. 14, 2014.

The high-profile romance resulted in the famous fusion of the couple’s name, “Brangelina,” by celebrity tabloids. Despite the Hollywood union, Pitt and Jolie said they managed a relatively normal existence away from the flashing lights of paparazzi.

“We wake up, we make breakfast. In our domestic life, we’re Mom and Dad,” Jolie said in a 2015 Wall Street Journal. “And often we’re dorky Mom and Dad, which the kids find ridiculous.”

Pitt added, “When Angie has a day off, the first thing she does is get up and take the kids out. This is the most important ‘to do’ of the day.  No matter how tired she might be, she plans outings for each and all.  She has an incredible knack for inventing crazy experiences for them, something new, something fresh. I may be the bigger goof of the pair, but she invents the stage.”

The announcement of the divorce generated a plethora of humorous memes on social media in support of Aniston.