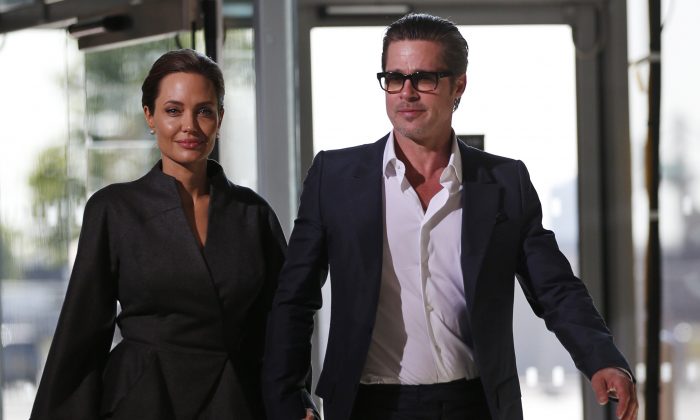 In this Friday, June 13, 2014, file photo, U.S. actress Angelina Jolie, Special Envoy of the United Nations High Commissioner for Refugees, accompanied by her partner and U.S. actor Brad Pitt arrive at the "End Sexual Violence in Conflict" summit in London. Jolie and Pitt were married Saturday, Aug. 23, 2014, in France, according to a spokesman for the couple. (AP Photo/Lefteris Pitarakis, File)
Entertainment

Brad Pitt and Angelina Jolie, recently married, apparently had a heated “argument” on a balcony in Sydney, Australia, according to reports and photos.

The two arrived at the State Theatre in Australia for the premiere of “Unbroken.”

“Just hours after reuniting in Australia for the first time in weeks due to their hectic separate schedules, Brad was seen throwing his arms up in a frustrated manner. Angelina meanwhile, appeared to be tired, upset and defeated,” said a report in WomansDay, an Australian publication.

Sources told the publication that the tensions between the two might have been caused by Jolie’s hectic work schedule in the past year.

After they got out of the car, the site notes that the two barely looked at each other or spoke with one another.

Pitt signed autographs while Jolie spoke with the media, the report said.

“It makes us happy to be married, if that makes any sense,” Jolie said to a reporter at the time. “I don’t think we needed it but it feels… he’s my husband.”

But only a few hours later, it was reported that the two were spotted house-hunting in London.

Jolie was seen looking for a home in Marylebone with prices up to £20million, according to MailOnline.

The couple already owns a Los Angeles home and a 35-bedroom French chateau.