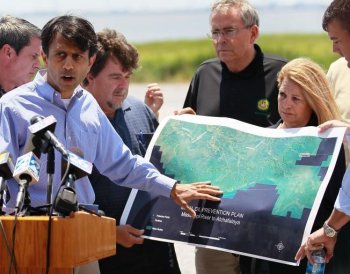 Oil Spill: Louisiana Governor Bobby Jindal points to a map showing the areas that might be affected by BP's massive oil spill as he meets with the media on May 10, in Lafourche Parish, Louisiana. (Joe Raedle/Getty Images)
US

By Shahrzad Noorbaloochi
Print
As efforts to combat the oil spill using a large containment dome proved unsuccessful because of an unforeseen build up of thick crystals called hydrates, BP officials announced new set of shaky plans for dealing with the crisis. The primary one is a "top hat," a smaller dome over the leak.

In a press conference Monday in Houston, BP Senior Executive Vice-President, Kent Wells and Chief Executive, Tony Hayward spoke about the new plan of action. Hayward said the new plan will combat the oil spilling into the gulf on three fronts: the subsea, the surface, and the shore.

At the subsea level, efforts will be geared towards stopping the leak by physical containment using a smaller container, which will be placed over the leak point. The dome, which is connected by drill pipes and riser lines to a drill ship on the surface, will collect oil for removal and treatment. According to Wells, the smaller size of the dome will combat hydrate build up and make sure that the problems with the larger dome will not occur again. They will be able to keep it warm by pumping warm water over it. The hydrate crystals blocking the larger containment device form in cold temperatures.

The placement of the smaller dome is by no means fool proof. Wells elaborated on the specific techniques. He repeated his earlier metaphor, “The work that is being done to combat the oil spill is like doing heart surgery at 5,000 feet.” The depth of the well, and the lack of experience with handling technologies at such depths has been a larger dilemma than the oil company had first expected.

The smaller dome will be supplemented with the drilling of two relief wells, which Hayward said would “ultimately be successful.” He described no back up plans.

When asked if there was a way to assess the success or failure of the cleanup attempts, Hayward replied, “I’m not certain there is an accurate way of quantifying the success of the efforts."

On the shore, Hayward said they have an armada of ships skimming oil and spraying dispersant chemicals. He said the oil is "not getting anywhere near the shore," though balls of tar have been reported on the Louisiana coast. He said thousands of ships have applied to help with cleanup and thousands of people have volunteered. Fishermen won a court injunction barring BP from requiring them to sign away legal rights if they work on the cleanup.

Hayward said the recent events will inform future practices. He also said the spill will produce a “great amount of learning” and that these events will have “profound implications for the industry.”

As to specific lessons being implemented as a result of the disaster, Hayward said, “Implications to the industry will only be clear once the investigation is completed… which will be months and months away.” The Manchester Guardian reported that the company has spent more than $1 billion to lobby for lighter safety regulations for its industry.

As cleanup efforts struggle, oil continues to spill at a rate of about 5,000 barrels a day, thus far amounting to about 4 million gallons or six Olympic sized pools of oil.