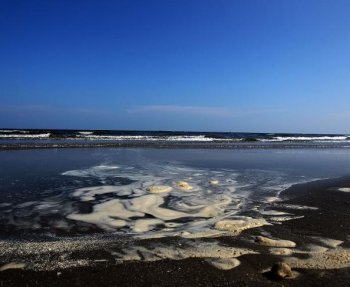 Pools of dispersed oil collect on a section of the public beach that was reopened yesterday for the first time in nearly 3 months August 10, in Grand Isle, Louisiana. (Win McNamee/Getty Images)
US

Ilya Rzhevskiy
View profile
Follow
biggersmaller
Print
BP Plc has got itself in yet another PR blunder when it hinted to the world that it could again start drilling for oil and gas in the same oil reservoir—Macondo—that spewed millions of gallons of oil into the Gulf of Mexico.

“There’s lots of oil and gas here…We are going to have to think about what to do with that at some point,” said BP Chief Operating Officer Doug Suttles last week in a statement.

BP estimates the remaining oil in the capped reservoir to be worth around $4 billion. This amount could certainly help BP to extinguish some of its huge debts for the damages it caused to the Gulf’s sea life and businesses along the coast. BP is on the hook for tens of billions of dollars of fines for cleanup and compensation costs that will hunt the company for many years to come.

Regarding the same leaked well that caused all the trouble, BP will certainly not be allowed to reopen it and pump back some of the oil, said the U.S. Interior Department.

“Under no circumstances are we going to allow them to reopen the well to extract oil and gas,” said department spokeswoman Kendra Barkoff.

To calm down the press, BP downplayed Suttles’ remarks, saying “BP’s present focus is entirely on the response effort in the Gulf of Mexico, and the future use of the reservoir is not currently under consideration.”

However, BP didn’t make it clear ahead of time whether they plan to drill in the Macondo reservoir in the future.

The Gulf oil disaster is the largest one among all the previous spills. It spilled 4.9 million barrels of oil into the sea, equating to 205.8 million gallons, before it was capped on July 15. BP’s last operation “static kill” proved to be successful, as the gushing well was stopped by being covered with mud and cement.

Right now the focus is shifted to the cleanup work as the oil is being removed and burned from the surface of the sea. After months of negative news, there is a pleasant surprise—the oil seems to be biodegrading quickly.

”It’s a race between the microbes eating it [the oil] and everything else being exposed to it,” said Larry McKinney, executive director of the Harte Research Institute for Gulf of Mexico Studies.

According to a federal report released last week, three quarters of the spilled oil is gone, being captured, skimmed, or dispersed naturally or by chemicals. However, many scientists question the accuracy of the report.

Many scientists believe that oil is far from being cleaned up, as it has dissolved into the marine life and soaked the Gulf for years to come. However, it is not possible to evaluate the damage accurately today, as the harmful repercussions of oil may manifest themselves in a variety of indirect side effects.

However, at the moment, everyone at the coast is feeling a sense of relief after months of battle to close the spilling well.

“Now that it has been capped, we’re seeing buyers creep back into the market,” said Mary Anne Windes, who is a real estate broker in Destin, Fla. “But there’s still a ‘perception that this place has been ruined forever.’”