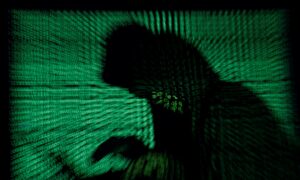 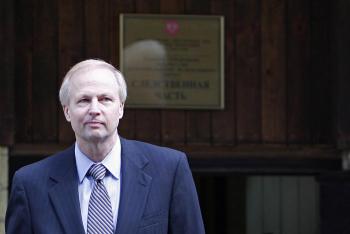 Robert Dudley, the British CEO of Russian-British oil firm TNK-BP, leaves a Moscow police station after being questioned on June 10, 2008. Dudley was questioned for several hours as part of a criminal probe into tax payments. (Alexey Sazonov/AFP/Getty Images)
Business

Grapples with Russian oil oligarchs could be risky

Due to management and strategic differences, in recent months the Russian partners of TNK-BP have tried to limit BP’s control over the company, according to reports. BP believes that its partners—who have strong ties with the Russian government—are using strong-arm tactics to seize BP’s oil assets in Russia.

The problem lies in that TNK-BP accounts for around 25 percent of BP’s global oil production, and owns around 20 percent of its worldwide oil reserves. BP can ill-afford to lose such a major portion of its oil operations.

Last month, TNK-BP’s CEO Dudley reportedly was forced to leave Moscow after failing to obtain his work permit and visa from Russian state authorities. Dudley and BP confirmed that he would continue to run the operations of the company remotely.

“[AAR has] been orchestrating a campaign of harassment in order to gain control of our joint venture," BP Chairman Peter Sutherland said in an interview with The Independent. "There has even been manipulation of the Russian state as part of this campaign."

"BP will use all means at its disposal, both inside and outside of Russia, to defend its interests and rights … This will include bringing arbitration proceedings against AAR to recover any and all losses suffered by BP as a result of their violations of the terms of our shareholder agreement," said BP CEO Tony Hayward.

An AAR spokesperson said in the same report that while the company was unhappy with Dudley and his alleged “bias” towards BP, AAR primarily acted in the interest of its Russian shareholders and did not play a role in Dudley’s visa difficulties.

In early July, BP filed a lawsuit in the High Court of London against AAR for 8.4 billion rubles ($357 million), money that BP believes should not have been paid to Russia as back taxes owed.

Animosity between the two parties has further deteriorated this summer in a series of very public remarks and lawsuits. Russian authorities have also investigated BP’s Russia offices and even arrested one employee on grounds of espionage.

Yet despite these actions by the Russian government, AAR has denied any claims of any improper behavior on their part that would violate their joint-venture.

"We don't believe AAR has in any way violated the shareholders' agreement. There is no basis for a legal action against AAR," AAR CEO Stan Polovets told Dow Jones Newswires. "The alternative for BP is years of litigation and further deterioration of its position in Russia."

In late July, AAR launched a separate lawsuit challenging the employment contract of Dudley. The suit claims that Dudley mismanaged the company and discriminated against its Russian employees.

"We are taking this action reluctantly. These technical experts have played a huge part in making TNK-BP one of Russia's most successful oil companies in the past few years,” Lamar Mckay, Executive Vice President at BP, said in a statement.

According to BP, the decision was not aimed to weaken TNK-BP in case of a state seizure, but to redeploy its skilled personnel to other ventures short on expertise.

After the fall of Communism, Russia has increasingly marketed itself under Boris Yeltsin and Vladimir Putin as a free economy friendly to foreign investment.

In light of recent business buyouts, human rights missteps, and its invasion of Georgia, some critics have called Russia’s social and economic development into question.

In 2006, Royal Dutch Shell sold its stake in the Sakhalin II project—at far below market prices—to Gazprom after pressure from Russian authorities.

It is unlikely that BP can escape completely unscathed if it continues to play hardball with its partners and Russian authorities. Oil and gas is the future for Russia’s economy, and the government will likely want a large piece of the market.