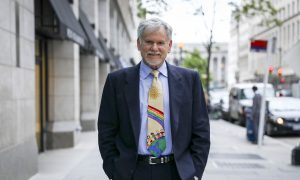 The Biden administration’s recently established White House Gender Policy Council appears to focus only on women and girls while neglecting boys and men, according to Warren Farrell.

Farrell, an educator and author for men’s and women’s issues, told The Epoch Times’ “American Thought Leaders” that by virtue of the new council’s name, it would “presumably help both genders in areas where they’re having problems.”

Farrell said that he believes President Joe Biden “feels that the only people who have issues that are worth paying attention to on a policy level are women and girls.”

Biden’s initiative may lead to more challenges that may ultimately warrant more government intervention, he said.

In addition to advocating for women and girls of all backgrounds, Farrell is advocating for the Gender Policy Council to consider including and implementing policies that would also benefit boys and men.

Farrell is a coauthor of “The Boy Crisis,” published in 2018, which describes what he sees as a profound crisis that boys and men in developed nations are facing. Key indicators include how, compared to girls, boys are behind in every academic subject at school; how men in general are more likely to be prone to addiction and mental illness; and how they are more likely to be involved in crime.

According to Farrell, being deprived of a father figure was a major aggravating factor for “the boy crisis.”

Among many examples, his book noted that about 93 percent of the U.S. prison population is male. Also, as boys become young men, their suicide rates increase from equal to that of girls, to five to six times more than that of young women, according to his research. “I would eventually find out that the single biggest cause predictor of suicide [across both genders] was being raised without a dad,” he said.

Farrell said he has communicated with Jennifer Klein, the co-chair of the Gender Policy Council, about the importance of having policies to help boys and men avert such a crisis.

“She’s sort of been very… let’s say, receptive and dismissive, meaning that she said, ‘Oh, President Biden cares about men and women, men as much as women. And he’s been a great father,’ and I said, ‘Yes, and there needs to be policies that help boys and men and that avert the boy crisis.’ And she’s expressed no interest in those policies.”

One approach, according to Farrell, could include efforts to help inspire men to contribute to society, feel needed, and be involved fathers.

He called the effort he described as a kind of “father warrior program,” which he said he was trying to suggest to Klein, but “there was not much receptivity.”

A second possible initiative, Farrell said, could come in the form of a “male teacher corps,” which he described as an effort to help train males to be teachers in elementary schools. He said this would help children who do not have a father figure at home.

He also expressed that in a Gender Policy Council, there can also be policies to help men and women as couples learn and implement healthy communication skills, including conflict resolution skills, and to help couples cooperate and appreciate the contributions they each bring to care for and educate their children.

“All of this can be part of the policies of the Gender Policy Council,” he said. “The result of that will be that women will find boys who are worthy of their love.”

“I don’t know why right now boys are dropping out of high school at a much higher rate. They’re much more likely, 66 percent more likely, to be living in their parents’ basement. I don’t know a lot of women who are looking for future fathers searching unemployment lines or the basement of parents for boys that have dropped out of high school. This is not the type of boy and future father that most women are looking for,” he added.

“We are hurting daughters every time we are not equally paying attention to the problems that are leading to our sons committing suicide five times as often as our daughter are.”

The White House did not immediately respond to The Epoch Times’ request for comment over Farrell’s assertions about the White House Gender Policy Council.

The messaging in society needs to change to inspire boys and men, Farrell said.

“We’re telling men that they’re full of ‘male privilege,’ that they’re the ‘oppressors’ that they’re part of the ‘patriarchy,’ and ‘the future is female,'” he said. “And you send a 14- and 15-year-old boy to school and you tell them the future is female, this doesn’t make them feel inspired to be involved over the world, and if you tell him that there’s no need for him as a father, that all fathers are jerks, this does not inspire him to be engaged as a dad.”

“Being disposable is not quite ‘male privilege,'” he remarked.

He later added, “we need to say we’re in a new era where there has to be a balance between keeping your feelings to yourself and being able to express who you are.”

Farrell was previously elected three times to the board of the National Organization for Women (NOW) in New York City. He said he had joined NOW “for genuine equality—to free both sexes from the rigid roles [of] the past, to more flexible roles for their future.”

He says times have changed since men and women took up traditional gender roles. “[In the past] we had a lot of very strong demand for large numbers of men to be willing to die in war, or to be the sole breadwinners. Now, women are sharing much more [of the] breadwinning burden, so men can be freer to do things that they love to do, as well as just things that they need to do.

“So reversing roles is something that is we have the freedom to do for the first time in history. And it can be very enhancing to both sexes. Boys and men who are that nurturer-connector type feel that they have a purpose in the world, and women and girls who are the provider-protector types, they feel that they are being supported in the world.