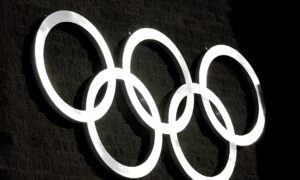 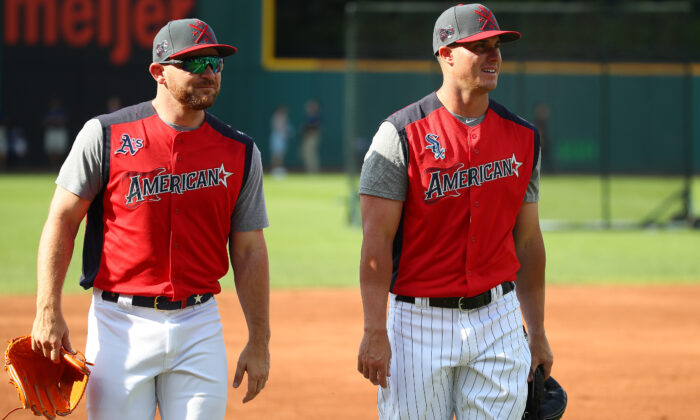 Liam Hendriks (L) of the Oakland Athletics and Lucas Giolito of the Chicago White Sox during the 2019 MLB All-Star Game at Progressive Field in Cleveland, on July 9, 2019. (Gregory Shamus/Getty Images)
Viewpoints

In a brazen act of cultural imperialism, Major League Baseball withdrew the 2021 All-Star Game from Atlanta.

Why make such a drastic change mere months before the great game? COVID? No. A failure of Atlanta to adequately prepare for the game? No.

MLB flexed its financial muscles to punish Georgia for passing a voting rights law that didn’t suit the sensibilities of its “woke” leadership.

MLB’s action is a step beyond what we have seen heretofore. When North Carolina passed a law requiring people to use public restrooms in government facilities consistent with their biological sex several years ago, the corporatocracy screamed, “Transphobia!” and instigated a boycott of the state—eventually coercing lawmakers into moderating state policy.

At least in the North Carolina case, the terms of the law were well understood. Not so in Georgia. MLB isn’t punishing Georgia for what is in the law, but for the lying narrative weaved by political progressives that mischaracterize the statute’s terms and purposes.

In other words, Georgia is being punished financially for vote-suppressing acts it didn’t take. In other words, Major League Baseball Commissioner Rob Manfred took this punitive action based on lies, not only in the media, but most blatantly by—and at the urging of—the president of the United States.

Specifically, “President Unity” sank into the caustic quicksand of demagoguery by claiming the new law is worse than Jim Crow—which simultaneously diminished the true evil of that pernicious former apartheid system while smearing Georgia as racist for strengthening voter integrity standards. It doesn’t get lower than that.

Even the Washington Post’s left-leaning fact-checker, Glenn Kessler, gave Biden “Four Pinocchios”—meaning a “whopper”—for lying that Georgia had shortened the hours in which polls could be open. In actuality, the new law does no such thing. Moreover, it adds time for early voting over existing policy, for example, requiring that at least two Saturdays be available to cast ballots before official Election Day and making Sunday voting optional.

Biden also lied when he claimed the new law prohibits water from being given to voters standing in line at polling places. Wrong. The law specifically provides the authority for poll workers to place unattended water stations where people line up to vote.

So, what is all the fuss about? The law prevents such giveaways as food and drink as a means of politicking within 150 feet of a polling location. All states prevent politicking at polling sites, and so that provision wasn’t extraordinary.

The hysterical reaction to the Georgia law exemplified the old Winston Churchill adage, “A lie gets halfway around the world before the truth has a chance to get its pants on.” But that is no excuse for MLB’s action.

Enough time has passed for Georgia officials and others to adequately rebut the most egregious falsehoods told about the law. Clearly, Manfred and other MLB leadership didn’t pay attention—or, perhaps more accurately stated, didn’t care about the facts. This was an opportunity to flex the corporatocracy’s muscles and virtue signal. So out of Atlanta the All-Star Game went.

And how’s this for bitter irony? For all its claims about caring oh-so-deeply for liberty, MLB is in business bed with communist China, helping set up a baseball league there as well as livestreaming games to the country.

You know, China! The same country that is committing genocide against the Uighurs, live organ harvests Falun Gong practitioner prisoners of conscience, and recently crushed democracy in Hong Kong—all without so much as a peep from the freedom-loving Commissioner Robert D. Manfred!

Here’s the bottom line: We are at a point in our country’s history in which major corporations make their own public policies—ranging from enforcing public COVID guidelines, stifling debate on social media, threatening to require a “vaccine passport” as a cost of doing business, and, as here, punishing political jurisdictions for enacting disfavored public policies—enforced through “free market” autocratic coercion.

The corporatocracy’s bullying is much more complicated to resist than oppressive government action because the Constitution doesn’t apply to private entities. Perhaps Georgia can bring a civil action against MLB. The withdrawal from the venue was arbitrary and had nothing whatsoever to do with the quality of the facilities, COVID, or infrastructure preparations for the big game.

But whatever legal remedies Georgia may or may not have, I do believe it is of urgent concern that MLB pay a stiff price for its temerity. We are in the midst of a liberty crisis. We are in danger of being swamped by the power manipulations of the increasingly centralized and ever-more ideologically homogeneous private sector.

An effective resistance will require millions of individuals to push back. Perhaps if fans generally—and would-be viewers of the All-Star-Game specifically—tune baseball out, MLB and the corporatocracy will understand that its blatant political side-taking comes at a significant cost. Not that I think that the virtue signalers in charge of our money-besotted private sector institutions will much care. These days, Big Business, Big Tech, and Big Entertainment are more motivated by ideology and the thrill of exercised power than, you know, profits.

But possibly, if the financial pain is deep enough, if the fans’ fury is measurable and visceral, there is still a chance to convince the corporate powers that be to back away from politics. It’s a weak reed, I know. People just want to have fun. But for the life of me, I can’t think of what else to do.