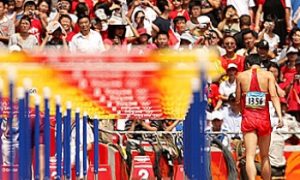 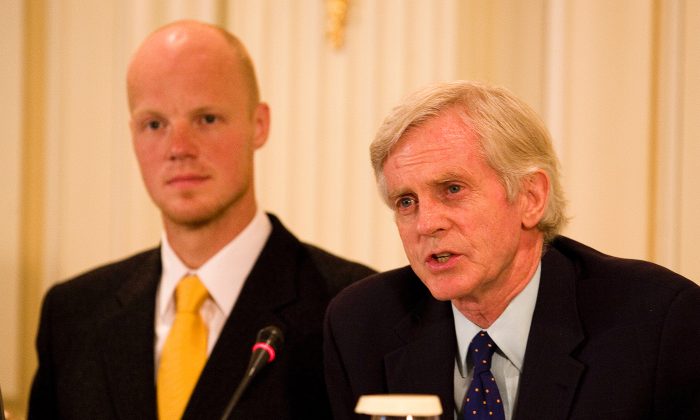 OLYMPIC SPIRIT: David Kilgour speaks at a press conference prior to the opening of the Human Rights Torch Relay in Athens on August 9, as 2006 Winter Olympics Bronze medallist Martins Rubenis, official Ambassador of the Relay, looks on. (Jan Jekielek/The Epoch Times)
China

ATHENS—Just hours prior to the opening of the Human Rights Torch Relay in Athens on August 9, activists called for the world to boycott the Beijing 2008 Olympics, citing a clear message: The Olympics and crimes against humanity cannot co-exist in China.

“This torch relay is aimed at urging the international community to boycott the Olympic games in Beijing, as we believe that hosting [them] would be a travesty of the Olympic spirit and a direct violation of the Olympic charter,” said Charles Graves, leading member of the Committee to Investigate the Persecution of Falun Gong in China (CIPFG). Graves is also Secretary-General of the NGO Interfaith International and a regular U.N. advisor.

The HR Torch Relay, initiated by CIPFG, is aimed at exposing and stopping the worst human rights violations in China, and will run parallel to the official Olympic Torch Relay, which will begin on March 25, 2008.

Graves was joined at the press conference by two Olympians: Jan Becker, an Australian swimmer in the 1964 Tokyo Olympics, and 2006 Winter Olympics Bronze medallist Martins Rubenis, official Ambassador of the HR Torch Relay.

“I believe the Olympic Games have always been a symbol of high moral standards, a natural striving of harmony between physical strength and spiritual force of human being,” said Rubenis.

“The Communist regime of China has no right to represent the highest principles of the Olympic movement.”

Jan Becker is shocked that simply because she started practicing the Falun Gong spiritual discipline, she has been forbidden by Chinese authorities from attending the 2008 Games. Furthermore, she believes that Olympic athletes are being asked to censor their opinions as the Games approach.

“Here in Australia I believe that the athletes have been threatened. If they talk about Falun Gong, they will be dropped from the team. Now this has come out through a person who knows somebody who’s an athlete in training. They’re not going to say much because they’ll be dropped from the team,” she said. She says she hopes some Australian athletes will go public with this information, but acknowledges that the prospect of going to the Olympics may be too strong for such an action.

Also at the conference was David Kilgour, co-author of the major report on organ seizure from Falun Gong prisoners of conscience in China. Kilgour focused on the organ harvesting issue, while also outlining a series of other violations currently taking place there.

“If the killing of Falun Gong prisoners of conscience across China does not stop immediately, and we’ll all know it if it does, people of goodwill everywhere should immediately call for a boycott of the Bloody Harvest Games,” said Kilgour.

Press conference speakers agreed that a boycott in itself is not the main issue. The activists’ stated goal is to use the threat of boycott to pressure Beijing into stopping some of the worst human rights violations happening in China today.

“The government of China is extremely sensitive on the Games; that’s why they acted on Khartoum [a reference to Beijing sending an envoy to Sudan at the urging of Steven Spielberg], that’s why I hope that they will act on this killing of Falun Gong practitioners,” said Kilgour.

Kilgour highlighted an August 7 letter sent to numerous China human rights activists as well as politicians, signed by forty prominent writers and scholars from China. It demands that Beijing 2008 Olympic slogan be modified to “One World, One Dream, and Universal Human Rights,” and that Chinese leaders stick to this provision, immediately giving “amnesty to all prisoners of conscience” as a start.

“We need support of all the medias, to let the world know what is happening, and this is the only way the athletes are going to find out,” said Becker.