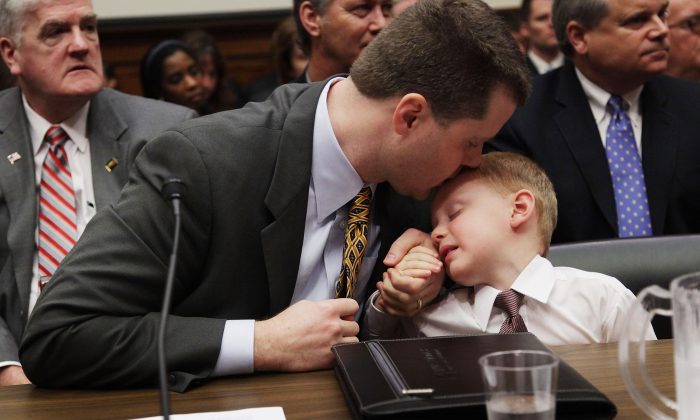 ALBANY, Ga.—A 10-year-old boy sickened by peanut butter and relatives of women who died asked a federal judge Monday to impose a stiff punishment on a former peanut executive whose food was blamed for poisoning them and hundreds of others.

Former Peanut Corporation of America owner Stewart Parnell listened from his courtroom seat as nine victims testified about the terror and grief caused by peanut butter traced to the company’s plant in southwest Georgia more than six years ago. Parnell and two co-defendants were convicted a year ago in the first criminal trial of U.S. producers in a food poisoning case.

“You took my mom,” Jeff Almer said to Parnell during his testimony, saying his 72-year-old mother was battling back from cancer when she died in December 2008 after eating peanut butter from Parnell’s plant. “You kicked her right off the cliff.”

Young Jacob Hurley was just 3 when he was stricken by salmonella from peanut butter crackers that left him vomiting and rushing to the toilet for nearly two weeks.

The salmonella outbreak traced to Parnell’s peanut plant in early 2009 was ultimately blamed for 714 illnesses and nine deaths.

“I think it’s OK for him to spend the rest of his life in prison,” Jacob, now 10, told the judge.

The salmonella outbreak traced to Parnell’s peanut plant in early 2009 was ultimately blamed for 714 illnesses and nine deaths, and triggered one of the largest food recalls in U.S. history.

A federal jury convicted Parnell, 61, of knowingly shipping contaminated peanut butter and of faking results of lab tests intended to screen for salmonella. Judge W. Louis Sands has estimated Parnell faces up to 803 years in prison for his crimes.

Federal investigators found a leaky roof, roaches, and evidence of rodents at the plant, all ingredients for brewing salmonella. They also uncovered emails and records showing food confirmed by lab tests to contain salmonella was shipped to customers anyway. Other batches were never tested at all, but got shipped with fake lab records saying salmonella screenings were negative.

Emails obtained by congressional investigators showed that Parnell once directed employees to “turn them loose” after samples of peanuts tested positive for salmonella and then were cleared in another test. Several months before the outbreak, when a final lab test found salmonella, Parnell expressed concern to a Georgia plant manager, writing in an Oct. 6, 2008, email that the delay “is costing us huge $$$$$.”

Members of Parnell’s family pleaded for leniency. His mother, Zelda Parnell, told the judge both of her sons “have suffered for years.”

“They lost their income, all their material things and worst of all their pride,” she said.

Stewart Parnell buried his face in the palm of his hand when his daughter, Grey Adams, told the judge that “my dad’s heart is genuine.”

Attorneys for Stewart and Michael Parnell told the judge both men plan to testify before they are sentenced. Neither took the witness stand during their trial last year. Several victims said the Parnell brothers’ long silence has made it hard to forgive them.

The judge set aside two days for sentencing in the case, but said he may have a decision later Monday.

Three deaths linked to the outbreak occurred in Minnesota, two in Ohio, two in Virginia, one in Idaho and one in North Carolina.