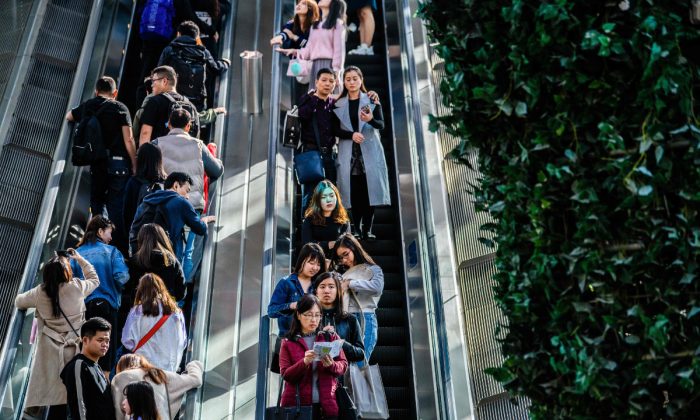 A six-year-old boy lost his index finger after his hand got caught in an escalator at a mall in mainland China. The boy was sent to the hospital, and his finger was later found inside the escalator, according to Chinese media Red Star News.

The mall, located in Luzhou City, Sichuan Province, said that they would comply with the law as far as payment went, but would not voluntarily offer money to the family.

The report did not disclose the names of the boy and his parents.

The family had gone to a mall on May 1, during one of China’s national holidays. Footage from a security camera shows the family riding downward on an elevator with the boy sitting for the ride, a few steps in front of his parents.

The boy is looking downward, seemingly putting his hand toward the moving steps. Both parents appear to be looking at him.

Footage shows that as the escalator approaches the bottom, the child’s hand appears to have gotten caught between the steps as he kicks his legs out and his mom jumps forward to pick him up. She pulls at him but his hand seems to be stuck, until he abruptly jolts away from the floor in her grasp.

The child flails around, and the mom grabs his right hand, jumping in panic as the father holds the boy still.

Others approach the scene, with several people looking at the parents holding their child. At the same time, a worker turns off the escalator, and the parents walk out of the camera’s field of view.

The boy was then taken to the hospital. Soon after, his finger was found inside the escalator.

No information was given in the report about the boy’s stay in the hospital, his condition and if his finger was re-attached to his hand.

Both parents paid the accruing medical fees, and then requested that the shopping mall take up some of the charges.

In response, the shopping mall management said that they would pay any expenses according to the law, but would not voluntarily donate to the child, according to Red Star News.