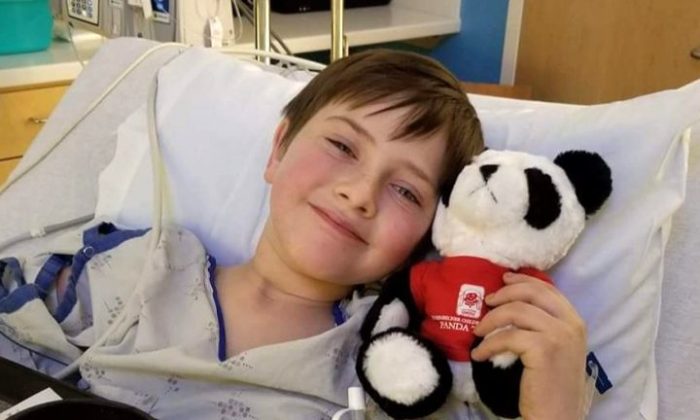 Liam Flanagan in hospital. (Screenshot via GoFundMe)
US News

Boy Dies From Flesh-Eating Bacteria Days After Falling From Bike

An 8-year-old boy died just days after falling off his bike, with his family saying that he contracted a flesh-eating bacteria.

Liam Flanagan fell off his bike in Pilot Rock, Oregon, and suffered a cut on his thigh. His mom took him to the emergency room and he was given seven stitches, according to Fox 12.

“It wasn’t a big deal. It wasn’t a bad one. It just needed a few stitches is all, that’s it,” mother Sara Hebard told Fox 12. “And he was taking it like a trooper.”

The boy was given a bandage and was sent home. Liam and his mother thought everything was fine.

His parents realized something wasn't right when he started complaining of intense pain days after the incident https://t.co/VpgrTdDfVR

8 y/o boy dies from flesh-eating bacteria after falling off bike, prompting his mother to warn other parents https://t.co/16XVah6Awy

But the boy’s leg continued to hurt. She gave him Tylenol, and later, they took him back to the hospital.

Doctors said that a type of flesh-eating bacteria spread from his ankle to his armpit, the Fox affiliate reported.

“There was a complication with the incision,” Hebard said on a GoFundMe page to raise money for medical expenses. “He was rushed in for emergency surgery to remove some infected tissue.”

An 8-year-old Oregon boy died over the weekend after an 8-day battle with flesh-eating bacteria. https://t.co/wxuPs6eYN3

Doctors operated on Liam during surgery, but ultimately, he was airlifted to Doernbecher Children’s Hospital in Portland for more tests. “I mean, how… how… that’s what I ask – how?” Hebard asked.

On Sunday, after he had undergone more surgeries, Liam died.

Doctors told the Fox affiliate that he suffered from necrotizing fasciitis, a flesh-eating disease that targets the body’s soft tissue.

“I would have to say for one, hug your children tight because you never know how quickly it goes, and then to pay attention to them and don’t just take for granted it could just be a simple accident,” Hebard told Fox 12.

“And to spread awareness because people don’t know. I had never even heard of this before.”