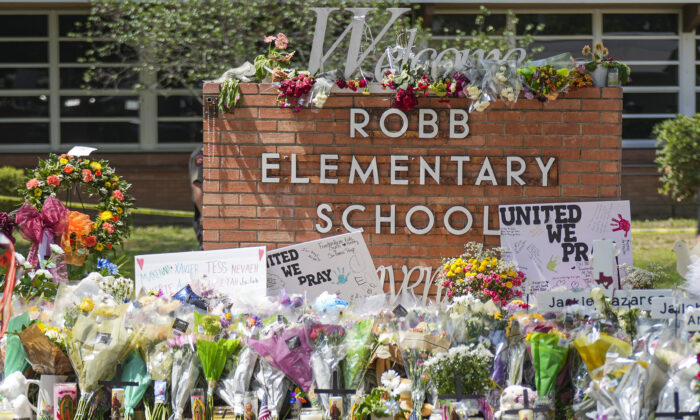 A 9-year-old student at Uvalde’s Robb Elementary School has described how he climbed through a broken window to escape last week’s mass shooting that left 21 dead.

Daniel Ruiz, sitting next to his mother, Briana Ruiz, said during an interview with CNN that the 18-year-old gunman fired “like four bullets” into his classroom, hitting his teacher and a classmate.

The gunman, Salvador Ramos, had also attempted to enter Ruiz’s classroom, but the door had been locked by his teacher, who also broke off the key before getting shot in her leg and torso.

Daniel explained that he and some of his classmates were “hiding under a table next to the wall” shortly after hearing the first two gunshots. He also recalled seeing Ramos through the door’s window.

“I could still see his face,” the boy said. “I could see him staring at people in front of me.”

Daniel told the news station that he later injured his hand on some broken glass after climbing out of the classroom window, adding that his wounded teacher and classmate survived.

The boy’s cousin, Ellie Garcia, who was also a student at Robb Elementary, was one of the 19 children and two teachers killed in one of the worst school shootings in U.S. history.

There is no known motive for the attack and Ramos had no known criminal or mental health history, according to Abbott. He was shot and killed by a Border Patrol agent after he reportedly barricaded himself in a room.

So far, there have been conflicting reports and growing public anger after information emerged that officers waited in the hallway and delayed its response.

On May 27, the head of the Texas Department of Public Security admitted they delayed entering the school for over 40 minutes because they did not believe it was still an “active shooter” situation.

“A decision was made on the scene—I wasn’t there—that this was a barricaded subject situation, there was time to retrieve the keys and wait for a tactical team with the equipment to go ahead and breach the door and take on the subject,” Steve McCraw said. “At that point, that was the decision, that was the thought process.”

The U.S. Department of Justice (DOJ) confirmed that it will conduct an inquiry into the circumstances surrounding the shooting, which was made at the request of Uvalde Mayor Don McLaughlin.

“The goal of the review is to provide an independent account of law enforcement actions and responses that day, and to identify lessons learned and best practices to help first responders prepare for and respond to active shooter events,” the DOJ said in a statement on May 29.