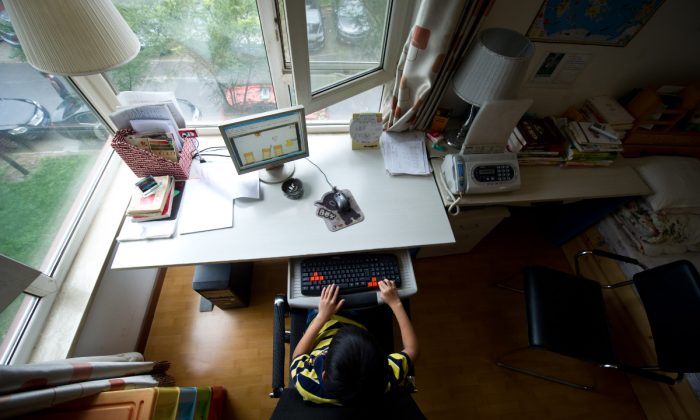 A boy using a computer in his room in China. (Ed Jones/AFP/GettyImages)
Social Issues

A 14-year-old boy called the police after his father insisted on installing security cameras in his room, according to Chinese state-sponsored media The Beijing News.

Police only attempted to break up the argument between the father and son, which occurred on July 21 in Nanjing City, Jiangsu Province, China.

The boy, who was unnamed in the report, argued that his father was infringing on his personal privacy. The father, also unnamed, argued that a surveillance camera is needed to watch over the boy at night while he and his wife are at work. He also said that his son stays up late and plays video games, thus affecting his school work, the report said.

The family’s final decision on whether or not to use security cameras was not included in the report from July 22.

However, Chinese authorities have already required surveillance cameras to be installed in rental properties. Some China observers believe that China is becoming a surveillance state.

The police arrived at the family’s house after they received a call from the boy. Footage of the argument was likely recorded by one of the responding officers.

The video shows the parents standing on one side of the boy’s bed, with the mother out of view, and the boy clutching his arm. The boy explains his situation.

“At first, since I’d play games too much, sometimes late into the night, my dad wants to install a security camera and control me,” he said in front of the officers and his parents, according to The Beijing News.

The father responds with a barrage of rhetorical questions. “What would I see you doing through a camera?” he asked his son.

“How many secrets do you have? And who am I to you? Am I not allowed to watch over you?”

The father then gives his reasons for wanting to install a camera in the boy’s room. “We (parents) are not at home because we are out working at night,” he said, according to The Beijing Times. In a strange comment, the father justified installing the camera to act as a warning to his son.

The father also wants to make sure his son went to bed at a suitable time. “He stays up until the middle of the night playing games or chatting when he’s not on school break,” the father said in the video. And then his son interrupts.

“But last night … .” the boy says, but the father cuts him off. “We’re not talking about yesterday. We’re talking about when you’re not on school break.”

The father took an aggressive stance towards his son for being disrespectful. “I’m just uneducated, right? Isn’t that what you said?”

“He said that we’re this old and we don’t understand the law or manners,” the father said, according to The Beijing Times. The boy only stood by and said nothing.

Police only attempted to diffuse the situation in the reported footage.

The report did not mention the family’s final decision on installing security cameras in the boy’s room.

The United States has roughly 50 million surveillance cameras installed across the nation in public and private, according to industry research firm IHS Markit (Chinese). China is expected to have 12 times more: over 600 million cameras, in the next three years.

Even people living in rental properties will be under constant surveillance in China, according to Bitter Winter. Two relatively developed provinces on China’s eastern coast, Zhejiang and Fujian Province, are required now to install cameras in rental houses. The claim is to protect against theft, mandated by police, according to local residents.

Landlords were issued a notice about the cameras, which stated: “Surveillance cameras must be installed before the landlord registers their rental property. Each living room must have a surveillance camera that faces the main entrance to the property.”