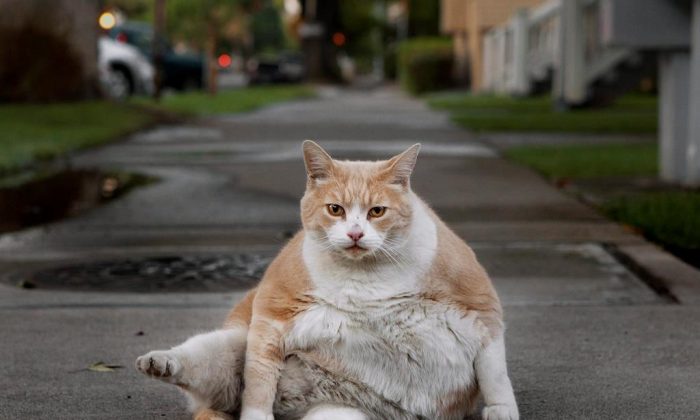 Norm Lopez takes a bath on the sidewalk in front of his house after his breakfast early Tuesday morning, Aug. 13, 2013 in Sacramento, Calif. (Sue Morrow-Sacramento Bee/The Canadian Press, AP)
Trending

A cat that, according to its owner, “can sometimes seem scary, especially to children,” has a friend: a little boy.

A viral video captured the boy “paying the sweetest visits” to Ace, a cat with one eye.

“People are often hesitant to greet him,” owner Norma Maikovich told The Dodo.

She said that Ace often rests on the porch, and as a result, she set up a camera to monitor the animal. The camera captured several instances where the child greeting Ace.

“When looking at the footage, we noticed one particular boy tends to visit almost every single day,” Maikovich said.

This is why we call him Ace of Hearts! And with that “wink”, who couldn’t love him ❤ #acethecat #cats #oneeyedcatsofinstagram #piratepets #hearts

She said her family was touched to see the cat, which was rescued as a stray, made a friend. The animal lost its eye due to an infection.

Man Spends 1.5 Hours to Build a Cat Door, but How His Kitty Walks In Is Hilarious

“It melted our hearts, not just seeing how much Ace loves this boy, but how familiar they were to each other!” she said. “Sitting by the front door, as soon as Ace sees his friend, he rushes out to greet him. It’s awesome, this bond they share.”

Maikovich said she informed the boy, who was not named, that he can visit the cat anytime.

“A friend of Ace’s is a friend of ours,” she said. “Once we realized that they were fast friends, it made us really happy.”

“Ace isn’t a scary guy, and it just goes to show that appearances aren’t everything,” Maikovich said. “Seeing the footage of Ace and his buddy really proves that when given the chance of life and love and a family, animals with special needs and handicaps are worth it too.”